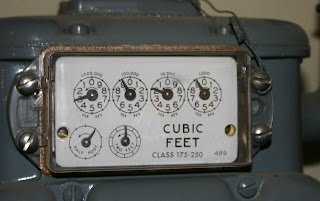 My gas meter is in the far corner of my basement. Because we are rarely home when the meter reader comes around, I have to read the meter and enter the numbers online. Today I got an e-mail from NiCor saying I must have read the meter incorrectly. The numbers I sent them are too big an increase over last month. Imagine that, they warned me I was going to be over billed. They suggested I take a picture and sent it to them.(Probably because they think I'm either too stupid or too blind to read the meter correctly) Since I have to contort my constantly growing fat ass into something resembling the letter S to read the meter, I decided to take a picture of it. I found my mistake right away and e-mailed the picture to NiCor. Just another warning sign that I'm getting closer and closer to a dirt nap.
Posted by Gregg at 5:41 PM