Last Sunday morning, I took the dogs to Sweet Woods for an early morning walk in the woods. When I got there, the cable that blocks the entrance was down but it was still laying across the roadway. So I drove over it and went in. There were at least 6 police cars parked all around the pavilion and a sheriff's police truck dropping off 4 wheelers. A sheriff's policeman told me the park was closed for a few hours. When I asked if they were culling the deer, he said no. He said it like I shouldn't ask anymore questions. So I figured he didn't want to admit they were killing deer in case I was with PETA or something like that. So I drove around to Brownell Woods which is across the creek from Sweet Woods. As I got the dogs out of the car and headed down the trail, another Sheriff's police car drove into the parking lot. He warned me that there was a report of someone shooting deers and he threatened to shoot himself. He said I probably shouldn't take the dogs into the woods because there were cops on foot throughout the area. That was enough for me to round up the dogs, which wasn't easy since we just got out of the car. We ended up walking along the cross country ski trail at Goodenow Grove Nature Preserve in Beecher. 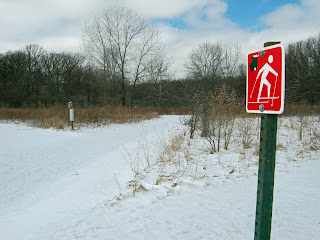