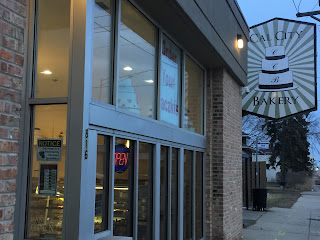 The start of this year has been depressing due to extremely bad weather almost every day and the non stop political ads by the 14 people running for mayor of Chicago. Since both are impossible to ignore, my drugs of choice today will be doughnuts from the Cal City Bakery and a walk in Calumet Park with my dogs. 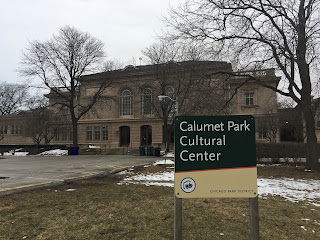 Since I drove up Burnham Avenue, I passed through working class neighborhoods and abandoned industrial areas. My family on both sides has been working class for as far back as I've researched. I take great pride in that. There's no doubt in my mind that the working class is what made America great. This was on my mind when I parked my car at the Cultural Center. These great parks throughout the city were created when the elected officials used your tax dollars to provide places like this for every citizen to enjoy. The following is from the Chicago Park District website.

"Envisioned in 1903 as part of the South Park Commission's revolutionary neighborhood park system, Calumet Park developed slowly, and was not completed until the 1930s. The commission conceived the innovative parks to provide social services and breathing spaces to overcrowded immigrant neighborhoods. Landscape architects the Olmsted Brothers created plans for 14 new parks, however four were delayed, including Calumet Park. Opened in 1905, the first ten included Russell, Mark White, Davis, Armour, and Cornell Squares, and Bessemer, Ogden, Sherman, Palmer, and Hamilton Parks.The commissioners acquired 40 acres to develop Calumet Park in 1904, but they decided to delay construction. The area's population began a period of rapid growth as European and Mexican immigrants settled in nearby South Chicago to work in the steel mills and railyards. Recognizing this population trend as well as the site's unique Lake Michigan frontage, the commissioners decided that Calumet Park should be much larger than they had originally planned. Initial temporary improvements allowed people to use the beach and some new playfields. Meanwhile, the commissioners began slowly enlarging the park through additional property acquisition and landfill. The park slowly evolved to nearly 200 acres in size. The South Park Commission constructed a monumental, classically designed field house in 1924. After the commission was consolidated into the Chicago Park District in 1934, additional improvements were made, including substantial work on the park's infrastructure and landscape. The park's name pays tribute to the Calumet region, which encompasses numerous south side community areas and comprises the basin of the Calumet River. The name Calumet comes from the Norman-French word for pipe, "chamulet." Early French explorers who traded with local Native Americans used the term in reference to their 'peace pipes'."

I'm guessing that local residents painted these concrete barriers after the city blocked this entrance to the park. 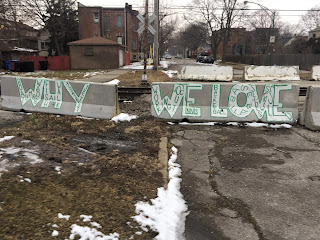 The reasons for loving this park are written in the letters. 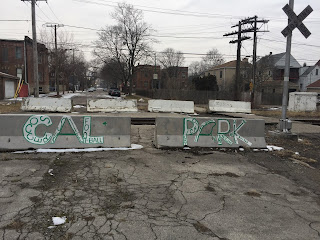 If you click on any picture it should go to full screen. 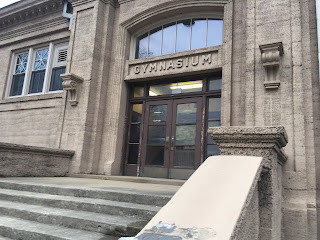 I have loved these old park buildings in NYC or Chicago since I was a kid. 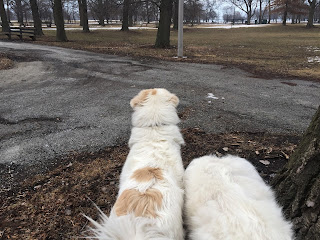 These two could care less about my political rants. Nola as usual is on guard duty and Oslo is smelling a hundred year old tree with the piss of thousands of dogs on it. 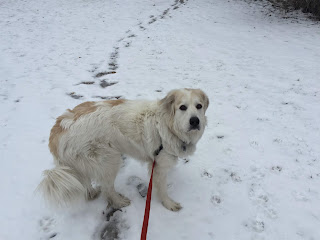 Closer to the lakeside of the park was a huge area still covered with snow... 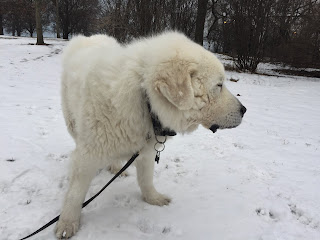 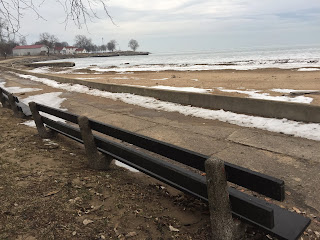 The beach was snow and ice covered. Even the sand was still frozen solid. 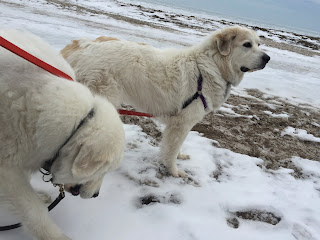 We explored like we were on an Arctic expedition. 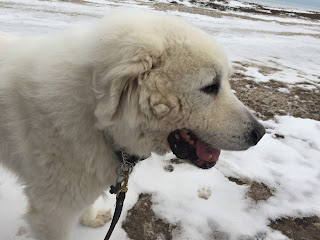 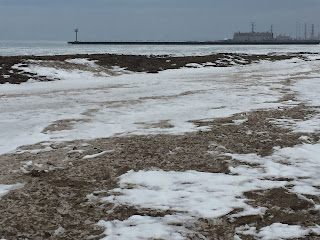 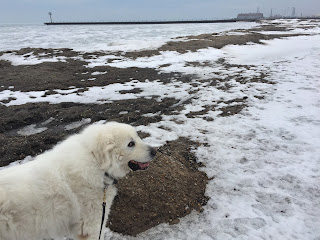 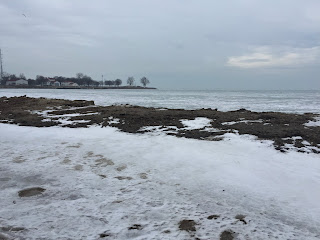 The lake was still frozen and we had the beach to ourselves. It's moments like this that make these hikes so special for me. It's so quiet and the rest of the world doesn't exist for a few minutes...a nice escape for me and my dogs. 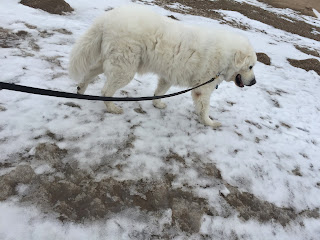 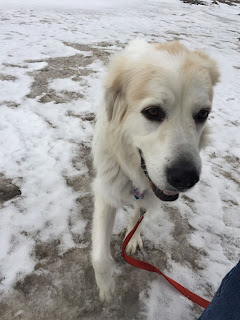 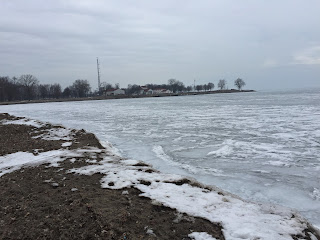 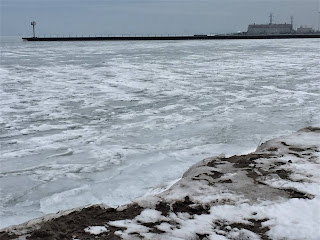 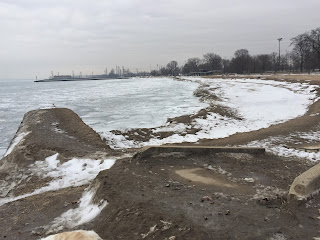 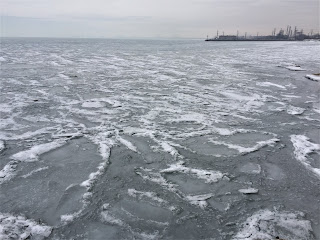 The lake was frozen as far out as I could see. 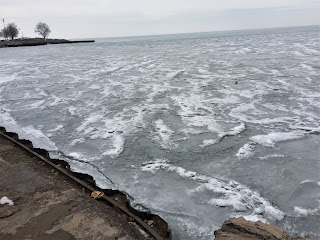 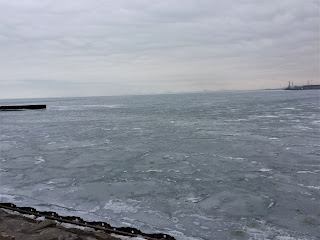 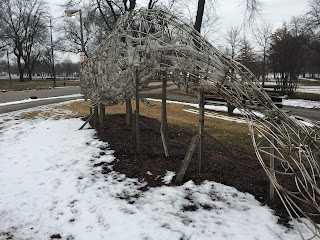 This whale art work is full of plastic bottles to bring attention to the huge amount of garbage floating in the oceans. 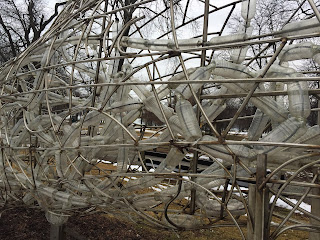 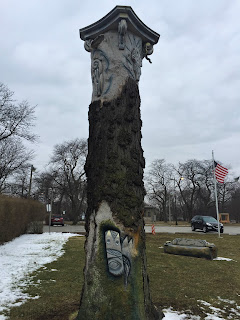 An old tree carved into a totem pole. 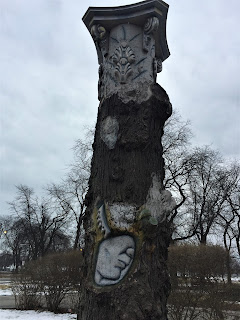 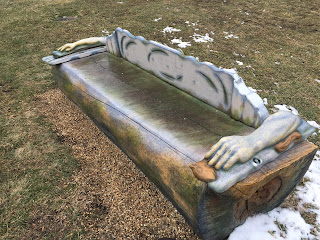 I love public art. This bench will wrap it's arms around you. I hope a post like this one will convince you to visit a local park or to cause you to contact politicians to support the parks in your area and around the country. Thank You.