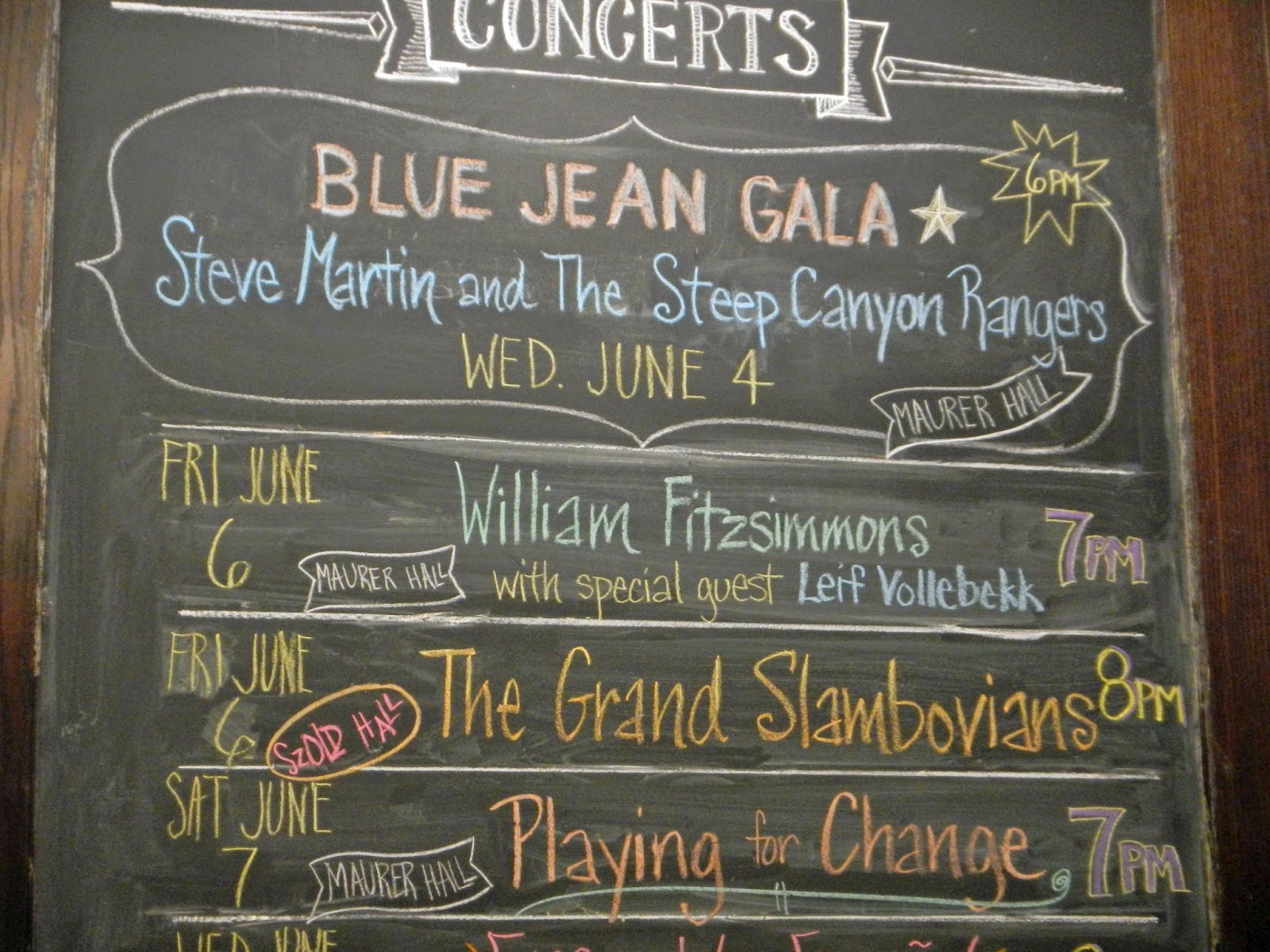 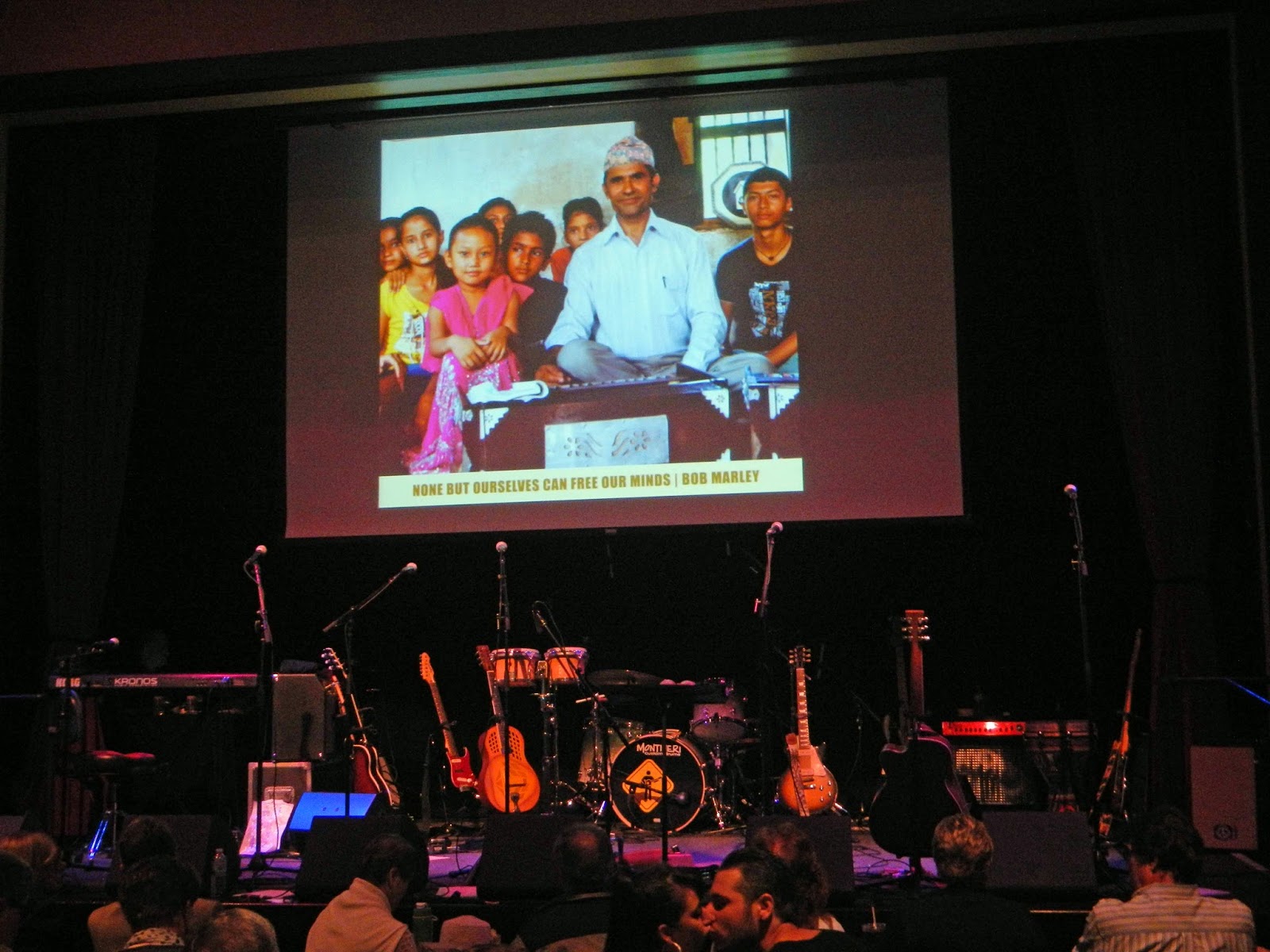 This blog is all about a great idea that has blossomed into an incredible charity. If you love music and can spare a few dollars please purchase a CD or DVD, or donate to the charity or do what I did tonight...buy a ticket to see the multinational Playing For Change band live in concert and on tour now. Here is the back story which I copied from the website Playing For Change.

HISTORY, MISSION, AND GUIDING PRINCIPLES OF THE PLAYING FOR CHANGE FOUNDATION
Playing For Change arose from a common belief that music has the power to connect people regardless of their differences. In 2005, a small group of film makers set out with a dream to create a film rooted in the music of the streets. Not only has that dream been realized, it has grown into a global sensation that has touched the lives of millions of people around the world.

When the crew set out, they created a mobile recording studio and went around the world filming musicians in the places where they lived. The sound was then mixed, and although the musicians were never in the same room—or even the same country or continent—they were unified through music with each contributing her or his distinct gifts to the whole. While traveling the world to film and record, the crew got to know the music and people of each community they visited. Those involved wanted to give something back to the musicians who had shared so much with them.

In 2007, the Playing for Change Foundation was established as a 501(c)3 non-profit organization created to inspire, connect, and bring peace to the world through music.  Our mission is to create positive change through music and arts education.

Here is the video that started this amazing project. The fact that this video has had over 62 million views puts a huge smile on my face. Sometimes I just need a reminder that there are people that care about music and people as much as I do. It gives me hope whenever I am down about current world events. Somedays that hope is what keeps me going.

Here's a few pictures from the concert which was appropriately at the Old Town School of Folk Music. I say that because the money they raise is used to build music schools in the poorest parts of the world. 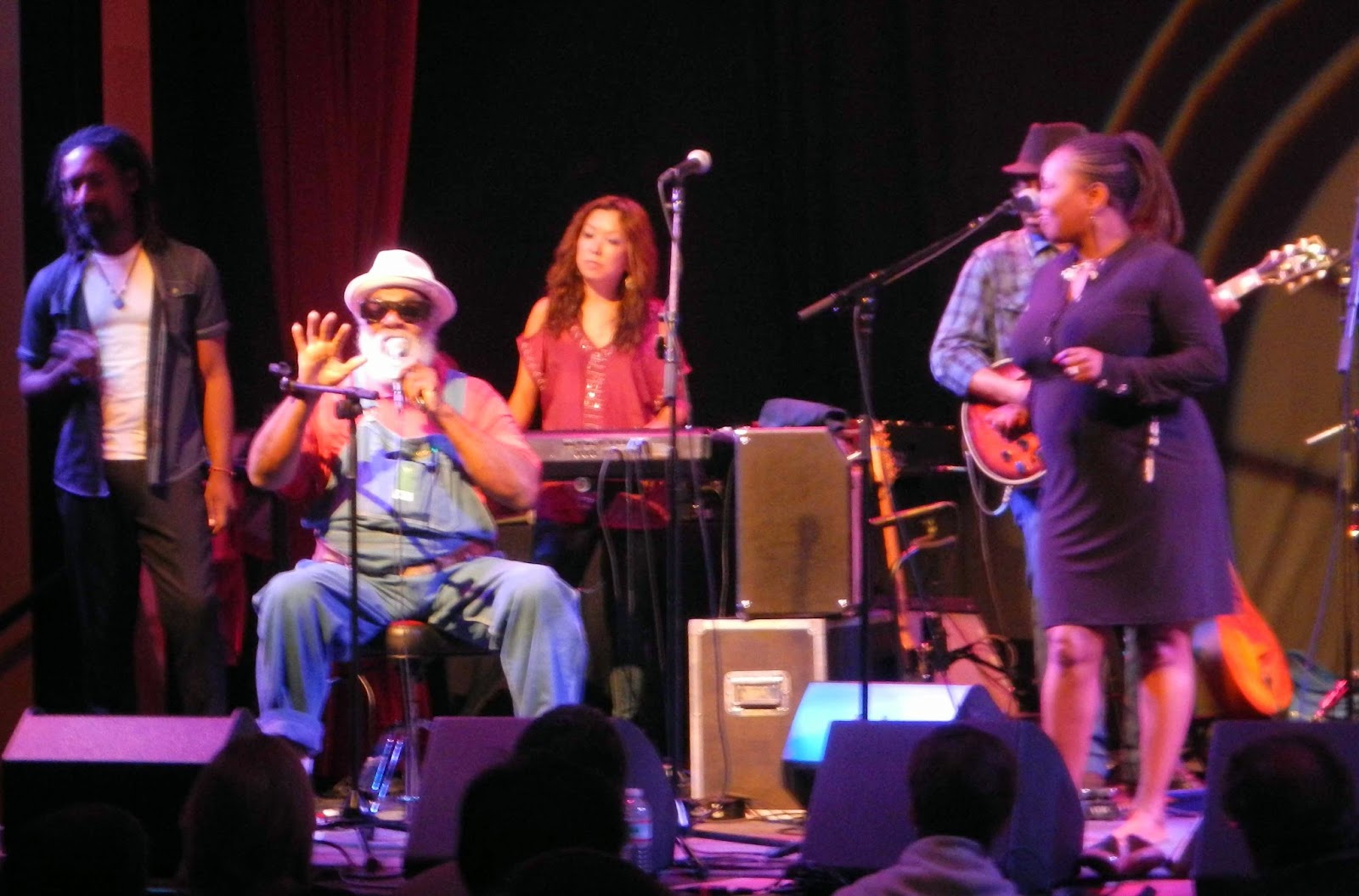 The blind street performer from New Orleans known as Grandpa Elliott not only provided some inspirational vocals and harmonica playing...he also provided some comical moments with his back and forth banter with Clarence Bekker from the Netherlands. The music was incredible as each member of the band sang songs from their home country and they all backed each other in the language of the person singing. They also sang several classic songs that seemed even more powerful to me because of the emotional connection the performers seemed to have with those songs. I've seen lots of concerts in my life but this one will stand out as the most memorable because of the wide range of music and the unique and amazing performances by each and every member of the band. 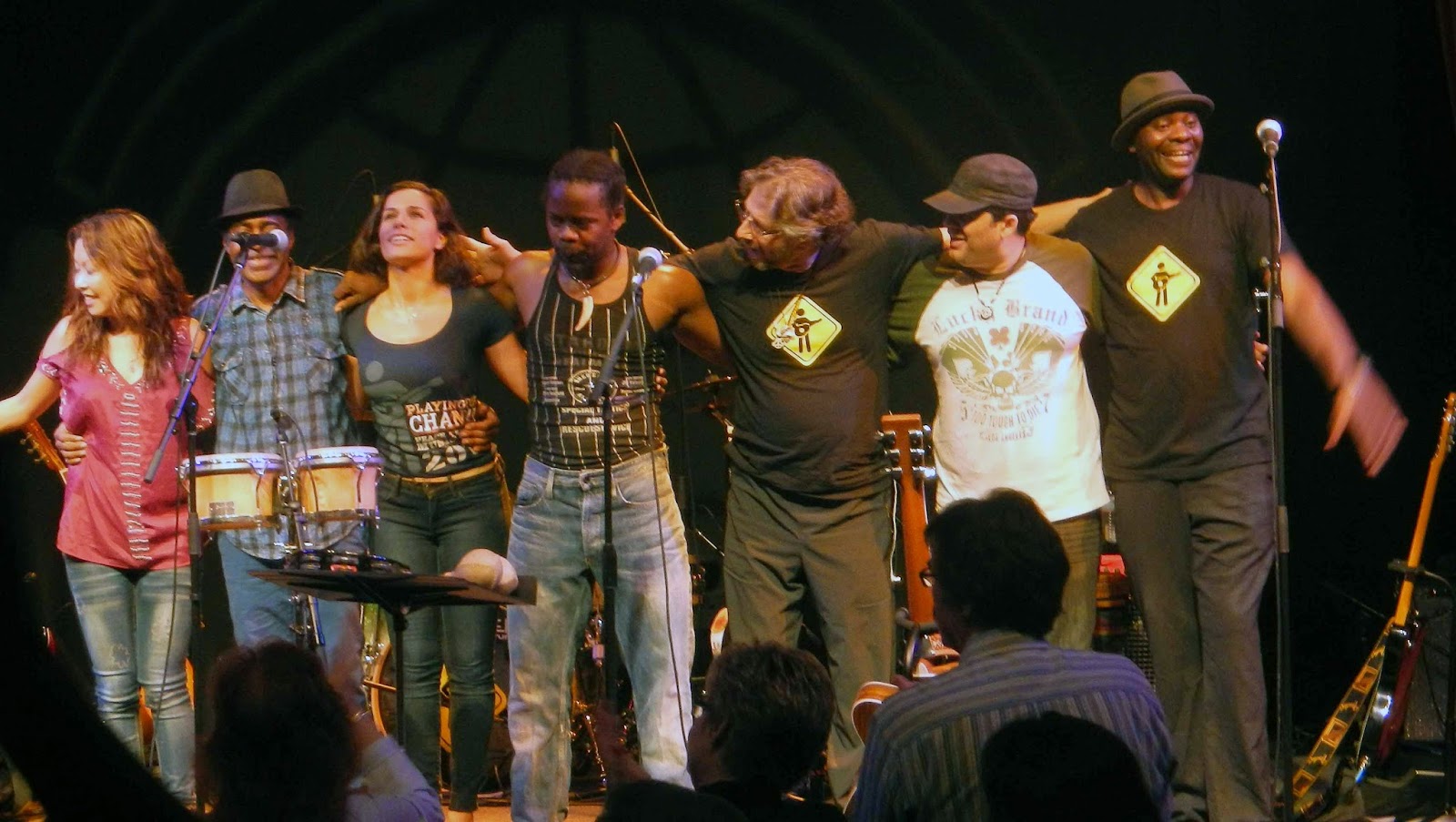 The band had people dancing in the aisles during the show and received an emotional standing ovation from the audience. The charity is about the power of music and tonights performance proved how powerful music can be all over the world. Mark Johnson, one of the driving forces who started Playing For Change, introduced the band tonight. He also told the story of his trip to South Africa where he was in one of the poorest townships near Capetown. It was one of the most depressing places he had ever seen. But as the sun set and a few musicians began playing on the streets, he saw people singing and dancing to the music. He realized that the music was able to give people a reason to celebrate and enjoy a small part of their day. That is when he got the idea to build music schools. The first Playing For Change music school was built on the same spot in Gugulethu, South Africa where he witnessed the story told above.

Here is a video about the charity side of Playing For Change.

Sure I could goof on myself for going to see old washed up bands playing without their lead singers. I can't pretend to act like buying a concert ticket from Groupon is in any way cool or hip. But this night was about hanging out with old friends....Styx, Foreigner, Don Felder of the Eagles and most importantly Debbie Sevilis. I met Deb, George & Rachel for dinner at the fantastic Mercat a la Planxa. Then Debbie, Rachel & I started walking to Northerly Island, then took a pedicab, then had to walk to the entrance of The Pavillion. It was a beautiful night on the lakefront and the twentyfour ounce Coronas were going down easy as we all sang along to our favorite songs from a long ago childhood. I'll admit I enjoyed the music more than I thought I would and spending time with the friend that I grew up listening to all those songs with is always a great time. Thanks Debbie for dinner and the show.
The first act was Don Felder and he played a bunch of the Eagle's hits and this song from the cartoon movie "Heavy Metal". I know I saw it at a midnight show but I can't remember who went...my best guess who be Mike Crafton, Lance Johnson, Rob Hollingsworth and maybe Kenny Burbridge.

The next band was Foreigner...and yes I missed Lou Gramm on vocals. Once again, the band sounded good and I sang along to all the songs but during this song I realized how straight forward the lyrics sound to the old me...when I was a kid I guess subtle wasn't a word I was familiar with at that time. I felt the same way listening to "Head Games" and "Feels Like the First Time". Okay lyrics obviously were not the band's strong point.
Styx was the headliner and why not...Chicago is their hometown. They played without Dennis DeYoung but since Styx had multiple lead singers, I didn't miss him as much Lou Gramm. The night was all about hearing your favorite songs from growing up and Styx did not disappoint me. They played more of their earlier hits...the ones before Dennis DeYoung took over control of the band but let's face it...those songs were better anyway. Domo Arigato they did not play Mr. Roboto. It was on that tour that I last saw Styx play in 1983. Unlike Foreigner, the lyrics to some Styx songs still hold up today.

Of course I have to end with this classic

I know it is currently known as Metro but when I was a kid it was called Cabaret Metro. It's like calling US Cellular Field...Comiskey Park...too bad...I call it what is should be known as.

I've been waiting for this show ever since I had to call my brother George at work minutes before tickets went on sale because I could not get an internet signal at the station I was working at. He ended up getting me tickets. So I thank him for that because this was a really good show. Dawes was the opening act and played a short but solid set. I've seen them a couple of times at festivals and they put on a good show. Taylor Goldsmith is one of my favorite songwriters. As I pointed out to Patty throughout their set, every song has a really good line that catches my imagination. The band plays their music very well. I've enjoyed seeing them live but never was blown away by them.

I've seen Conor Oberst in concert twice...both times I was blown away by the power of his lyrics and how passionately he performs those songs. The interesting twist to tonight's show is that Dawes is the backing band for Conor Oberst....and Dawes was amazing performing Conor's songs....and so was Conor. I was up late last night watching the Blackhawks win in double OT and this show didn't end until 12:30am but I didn't care because the music was that good. I highly recommend checking out both of these bands on record and of course in concert. This is what makes music so wonderful...well written songs performed with skill and passion. 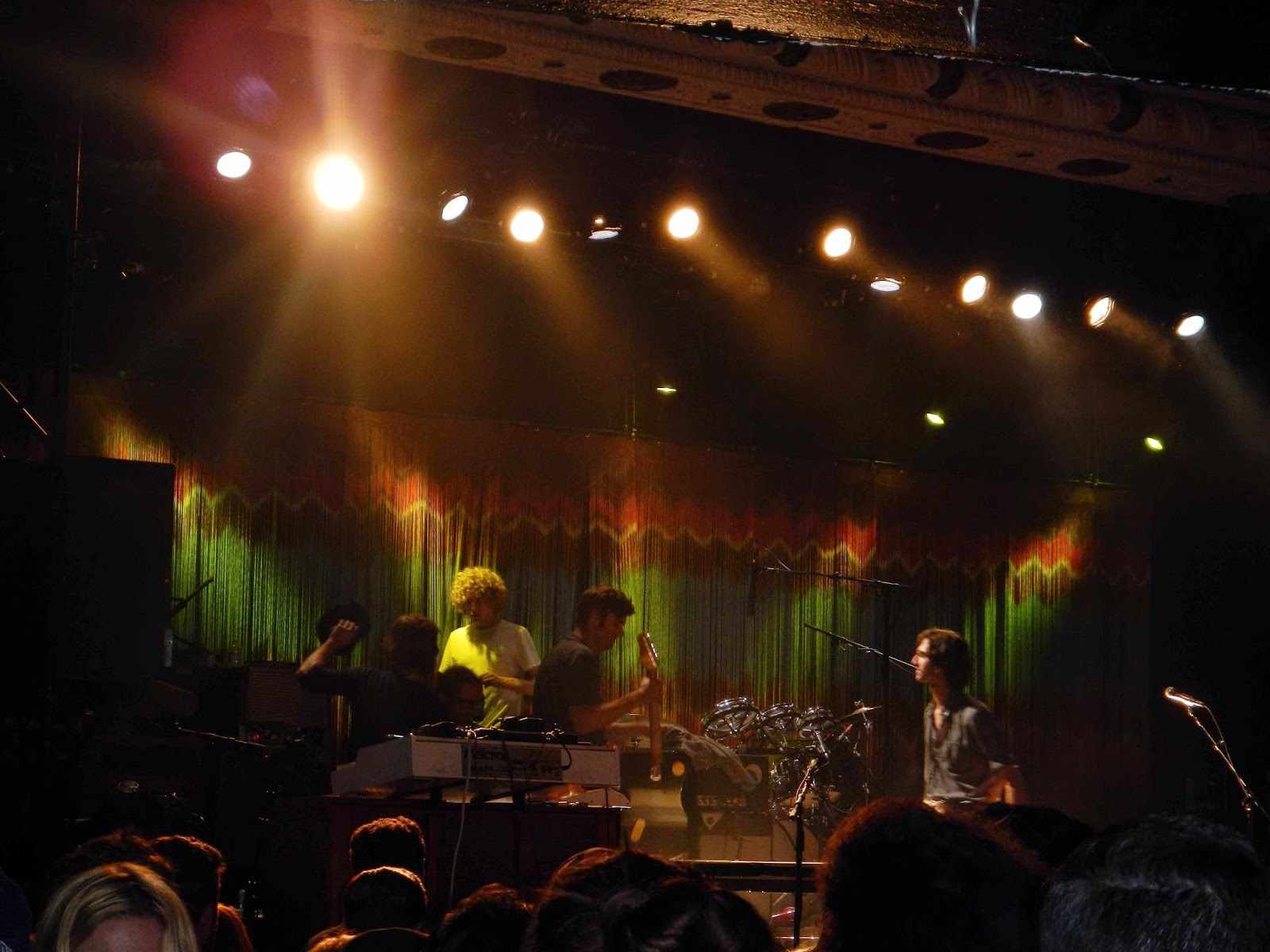