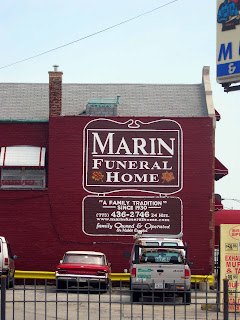 Gage Park, Chicago, IL
Last weekend I was back on the mountain bike trails for the first time since my surgery. Tonight I played hockey with my NorthStar team in a league game for the first time since last October. I had no intention of skating in a playoff game but we were playing short handed in the loser bracket. We lost our first playoff game so we were playing for the bronze medal. Just like mountain biking last weekend, it felt great to play hockey with my team...I was slower than my usual slow self but it felt great to skate with a real purpose besides rehabbing my leg. I didn't contribute much but we won early in OT to finish the season on a high note. I didn't take any pictures at the rink so I used this one from earlier in the day. I figured if things went wrong, Chrissy could call them to pick up my corpse at the H-F Ice Arena.﻿
Posted by Gregg at 1:28 PM