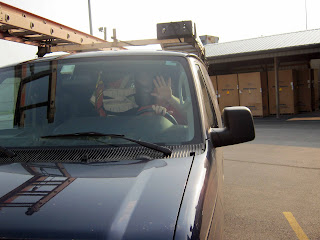 7:52am Lansing, IL
This one is going to take some explaining. This blog involves a couple of my friends. The first one is pictured here, Rick. Well almost visible in this picture. The second one is our mutual friend, Bill. I know both of these guys from playing hockey with them. Rick & I have worked together on and off for twenty years now. Even when we worked at different companies, we still used our company cell phones to make each other laugh, bust each others balls and run pump problems by each other. Rick is easily one of the best techs I know. He should be, I trained him. He also has this way about him that makes me want to ridicule him. It's hard to explain. So I'll put it like this, sometimes while talking to him, it is as aggravating as dealing with my wife. So he takes a ton of abuse from me for this particular trait. The most common abuse I give him is about his dislike of women and his proclivity to surround himself with men. I've joked about his 'Boyquarium' for years. So I gave Rick the nickname "Johnny Cakes" after seeing an episode of the Sopranos that involved a gay mobster. Now on to Bill. I've played hockey against Bill for years but never got to know him until a few years ago at the Sudden Death Hockey Club skates on Monday & Friday at the St. John Ice Rink. Bill has been my one fan of this stupid blog since I started it. He also loves life. It is impossible to spend time with Bill and not enjoy it. Hell, Bill is the oposite of Rick. After speding time with Rick, you speed dial the local Suicide Prevention hotline. I'll even excuse Bill for abandoning our locker room at St. John to join the Boyquarium at the Manadu locker room. He needs an intervention but that is for another day and another blog. The whole point of this blog is to get Bill to stop posting comments asking when I'm writing a blog about Rick. Why Bill wants a blog about Rick I don't know. Like I said he needs an intervention real soon before he becomes a lost cause. Anyway, I started calling Rick, "Superstar" because our boss never yells at him. At a place where everyone is told they never do anything right...Rick can do no wrong. At first he was "Jesus Christ Superstar" everytime the boss looked lovingly at him, then it became "Johnny Cakes Superstar". It is always sung to the song from the rock opera.
Johnny Cakes, Johnny Cakes
Who are you? What have you sacrificed?
Johnny Cakes Superstar
Do You Think You're What They Say You are
Posted by Gregg at 9:21 AM