It was kind of like getting tickets for the old Bozo's circus, you have to plan years ahead. I was on the waiting list for two years and today I finally got to the bottom of the Thornton Quarry. Everyone that lives on Chicago's South Side has driven over the quarry on I-80 between the Halsted and Torrence exits. Here's a few of the facts I learned on the tour. It is one of the largest stone quarries in the world. It is over 400 feet deep. The western section which is not visible from the highway is part of the Deep Tunnel Project that has been under construction in Chicagoland for over 30 years. It can be used as a reservoir to temporarily store sewer water during storms. The biggest surprise was discovering that over 400 million years ago, this area was an inland tropical sea. So the quarry is full of fossils from the Silurian reefs that existed back then. 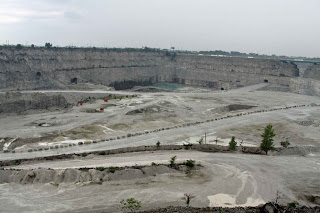 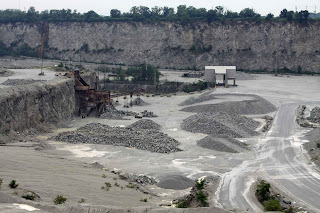 The tour is run by the Thornton Historical Society. It begins with a short video about the history of the quarry. Then we stopped at an overlook on the southeast corner of the quarry. 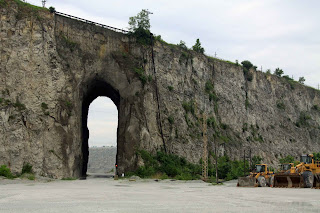 Then the fun begins. A school bus takes us into the quarry while an employee from Material Services, who run the quarry, takes over the tour. He explains the day to day operations and answers questions. 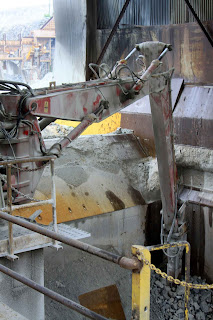 Every piece of equipment down here is huge. This mechanical arm is part of the eight story high crusher building. It is used to move big pieces of rock into the crusher. 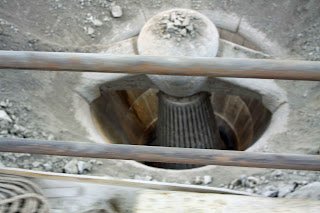 Due to the slow economy, the crusher isn't running today. There is no work happening anywhere in the quarry on this Saturday. 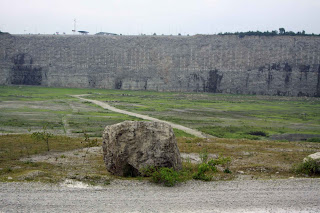 This is the western side which is part of the Deep Tunnel project. If needed they could pump overflow sewer water into this side by opening some valves during storms. It can hold over three billion gallons. 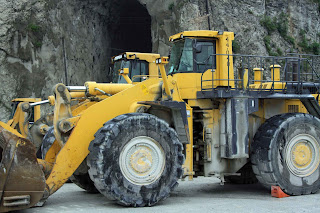 As I already said, there are really big pieces of equipment down here. I wondered how the hell they change a tire on these things. 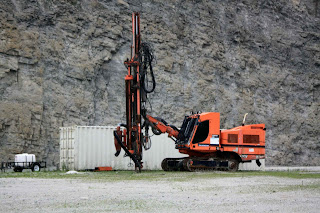 This is used to drill holes for the dynamite used to break apart new sections of the rock. 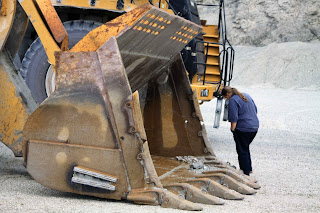 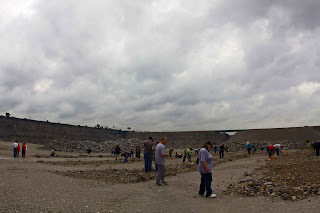 The tour group searching for fossils. 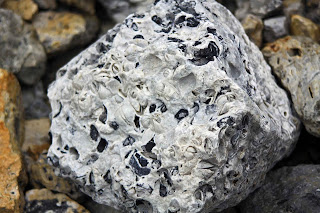 I originally did not care about searching for fossils. Then Jimmy, who went with me, showed me some rocks filled with fossils. It was pretty amazing to see. Click on the picture to see it full size, there are a lot of shells and and other unknown to me fossils. 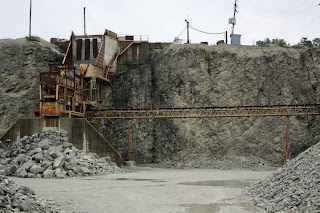 This is where they take giant pieces of rock and break them into very large pieces which are usually used along shorelines for erosion protection. 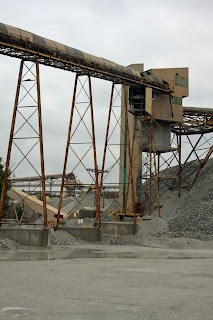 Smaller processed rocks are moved out of the quarry by conveyor belts. 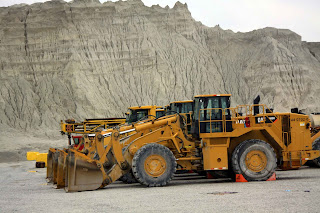 Back at street level, there are mountains of crushed limestone. Some piles have been there so long that birds dig out little cave like nests at the top. 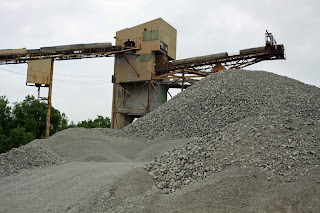 Here's the end of the line for the conveyor belts and our tour. You can check out this link for info about the tour, Village Of Thornton.
Posted by Gregg at 10:00 PM