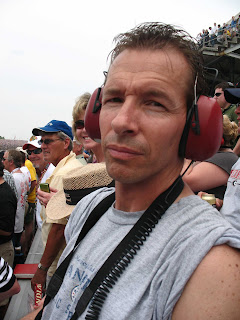 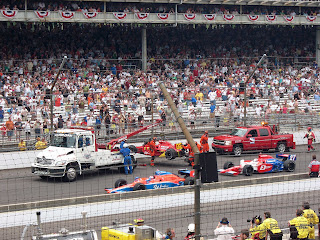 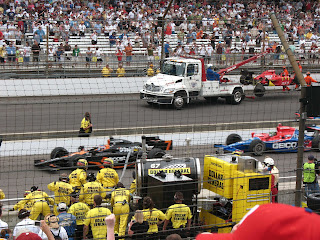 Jimmy & I have gone to the Indy 500 every year since 1985, there was a year here & there that I missed for various reasons. Our seats are near the finish line on the inside of the track, so we have the pits in front of us. Sara Fisher's Dollar General crew was there this year. The race was won by Dancing With The Stars champion Helio Castroneves. I'm only mad at him because once again Jimmy won our bet. Every year we pick 3 or 4 drivers and if one of your guys wins you get $10 and if your guy finishes dead last you get $5. Jimmy won both bets this year even though I had the top 3 guys (Kanaan, Dixon & Franchitti) for most of the race. You'd think Jim could at least smile for the picture. The headphones are for listening to the pit crews talk to the drivers during the race. It seems like a race geek thing to do, but sometimes you hear some good stuff especially when a driver is pissed at another driver. One of my drivers, Graham Rahal was nice enough to crash into the wall right in front of us. That's his 02 car being towed away while Sara Fisher's crew gets ready for a pit stop. Overall it was a good day spent with an old friend and because I was at the race I missed the Blackhawks getting their asses kicked by Detroit which would have ruined my day if I had watched that game. It all makes me want to have some turkey. That's only funny to me, ask Jimmy for the reason why.
Posted by Gregg at 10:27 AM