I will get to the information on this month's Social Club Meeting. It will be Friday April 12 in Griffith, Indiana. But first I have to explain how this event came to be. It started while watching Real Time with Bill Maher. A guy named Charlie LeDuff came on to promote his book, "Detroit : An American Autopsy". I loved the way Charlie expressed his views about his hometown of Detroit while also including the way America has forgotten about certain segments of the country. I have long been fascinated by the way America has abandoned the cities that have literally built this country...Gary, Detroit, Erie, Youngstown, Cleveland, Pittsburgh. The so called Rust Belt. I ordered his book that night. 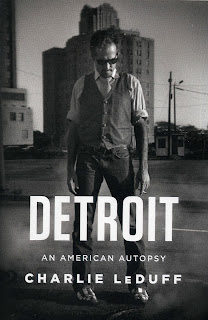 The book details Charlie's return to his decimated hometown. It is about his two families, those that are related to him and those that live in his city. He tells stories about the good and the bad in his two separate families that are united by the city where they live and die. It is also a warning to the rest of America of what can happen if you choose to ignore what is happening around you. In the book, Charlie attempts to use his position as a reporter at the Detroit News to help a few good people in need. One story was about Britta McNeal, who had two sons that were murdered a year apart from each other. She didn't have the money needed to bury her kids. Mr. LeDuff writes "It would be easy to lay the blame on McNeal for the circumstances in which she raised her sons. But is she responsible for police officers with broken computers in their squad cars, firefighters with holes in their boots, ambulances that arrive late, a city that can't keep its lights on and leaves its vacant buildings to the arsonist's match, a state government that allows corpses to stack up in the morgue, multinational corporations that move away and leave poisoned fields behind, judges who let violent criminals walk the streets, school stewards who steal the children's milk money, elected officials who loot the city, automobile executives who couldn't manage a grocery store, or Wall Street grifters who destroyed the economy and left the nation's children with a burden of debt while they partied it up in Southampton? Can she be blamed for that?"
The day after I finished reading the book, I got a Facebook message from my friend Ryan. He is the kind of person that will help anyone if he can. I can't remember how many times he plowed the alley up to my driveway without me even asking him to do it. A friend of his needed a DJ for a fundraiser. He asked me if I could help out. I have DJ'd fundraisers for people I knew but never for a stranger. My first thought was to say I couldn't do it. But I had just finished a book about people that needed help and most of them never received it. So I was introduced to Jonathon Travis, a person I would never have the chance to meet because he recently died. So I read about Jonathon. He left behind a wife and four kids. The family needs help with the funeral costs. He seemed like the kind of person that could have been a friend of mine. So I decided to DJ the fundraiser this Friday, April 12th from 5pm-11pm at the Knights Of Columbus 1400 S. Broad Street in Griffith, IN.
I am also making this the Social Club Meeting for April. I am asking my friends to stop by if you can or  donate online. If you want to stop by, there are several types of donations...$15 for admission, $20 for food, soda and door prizes or $30 which adds beer & alcohol drinks. So once again, I am asking my friends to stop by, have a beer with me and donate a few dollars to a family in need. It seems like a good way to kick off next weekend. 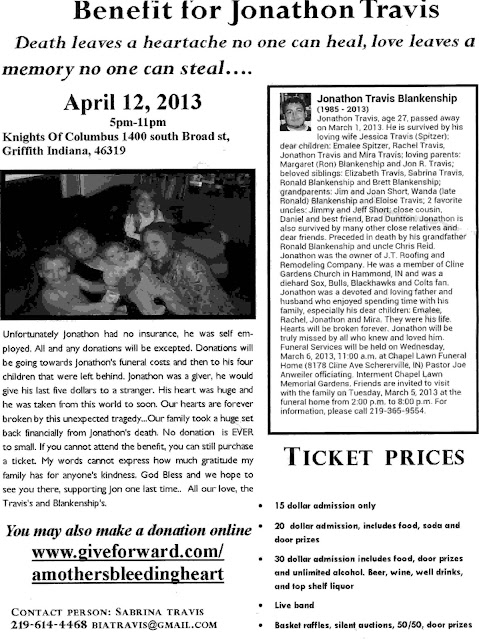