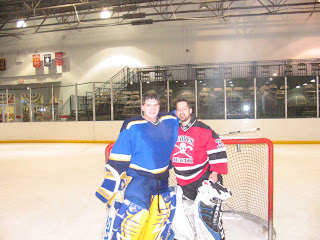 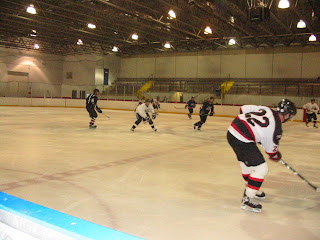 For almost 3 years I've been playing hockey with the Sudden Death Hockey Club. It is run by Frank Buck and Marty Hollingshead and we play on Monday & Friday nights. It is a group of guys who just want to play hockey with friends. The teams are picked each night from whomever shows up and the games are usually competitive. But it isn't the on ice antics that make it so much fun to play with this group, it is the locker room banter and post game trips to local bars that brings us together twice a week. The usual comments are about Tom's hairy body, Reg Dunlop quotes from "Slapshot", some of the 'veteran' players scaring the youngsters into not showering after the game. Then there are comments that stretch the boundaries of good taste, but usually get the biggest laughs. Over the years we've been bombed by Eric's "Green Hand Grenade" cologne, heard Bill's various ways to get his dog to 'like' him and Walt's descriptions of German video's he found on the internet. Between the hockey and the conversations, it keeps us returning each week for more. I've said it before, it is 2 hours away from all your worries and you're gonna leave smiling. That's why I play. The picture on the left is our two Italian goalies, Bada Bing & Frenchie. The one on the right is Reg Dunlop and it is for Vicki, his biggest fan. Don't ask me how Frenchie got his nickname because I really don't know, but once you get a nickname on this team, it stays. Some guys don't even know "Reg's" real name.
Posted by Gregg at 11:03 AM