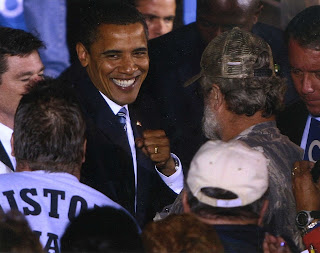 If you have read this blog for awhile, it should be obvious I was thrilled when Obama became President. This picture ran in the Northwest Indiana Times on November 1, 2008. It looks like Mr. Obama is about to punch one of my best friends, Mike Crafton (wearing gray T-shirt with HISTORY across his back). Obama is actually giving him a fist bump because Mike mentioned a close friend of Obama's that used to be on the radio. Pretty cool to get a fist bump from a future President. I can't say I'm thrilled with everything he has done so far, but I still believe he is the right man for the job of resurrecting this country from the disasters he inherited. There are those that are attacking every move he makes. I will say that it is quite a change to have a well spoken, articulate, self made man as President instead of a silver spoon fed dolt that couldn't put a complete sentence together.
Posted by Gregg at 6:40 PM