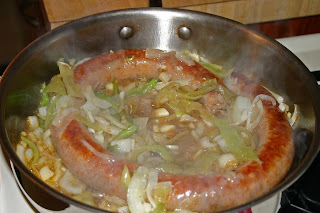 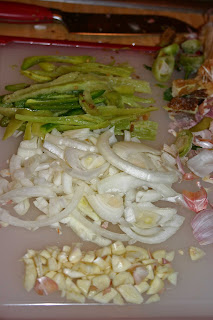 I'm only a month into this blogging thing and I already have my biggest fans. So this one goes out to Bill Valentine and his wife Vicky. Bill first wrote to me about pictures of a dinner I made for my wife. He asked me to quit posting stuff like that because he already has to worry about his wife around our friends, Reg & Walt. His wife also sent an e-mail saying she hoped Billy would get back to playing hockey soon so that my cooking & cleaning would rub off on him. Since then I have gotten several e-mails about updating the blog daily. So today's pictures of preparing onions, peppers (from our garden) and garlic for sausage sandwiches goes out to Bill's wife, Vicky. Seriously, thanks for reading this blog everyday. But in typical locker room fashion, I have to give Bill a shot. So Vicki, if Bill isn't taking care of dinner once in awhile, maybe there are other areas Bill let's you down. I'm sure you could find several hockey players that could help you out.
Posted by Gregg at 6:12 AM