I've been watching the Ken Burns series about The National Parks: America's Best Idea. I have also been editing my pictures from our trip to the Badlands, Yellowstone and Grand Teton National Parks at the same time. As usual, Ken Burns has done a masterful job with this documentary. I've learned about the people responsible for saving the land that has become our National Parks. In my mind, these people should be as well known as the names of the people who became filthy rich by exploiting the land for their own personal gains without a thought toward the future. So I'm thanking Stephen Mather for insisting on the creation of America's National Park Service. The following was taken from the National Park Service website:

Stephen Tyng Mather led a full active life of 63 years, from 1867 to 1930. The years spanning the turn of the century saw vast changes in the country's demographics, as well as the development of modern forms of transportation and communication, and increased leisure time. Mather was able to capitalize on these trends in his marketing efforts at the Thorkildsen-Mather Borax Company, which made him a millionaire, and in his public life as the first director of the National Park Service. During his life, Mather was an active member of numerous organizations, including his college fraternity Sigma Chi, the Sun Alumni Association, the Chicago City Club and Municipal Voter's League, and the Sierra Club. He was always a strong supporter of the University of California at Berkeley. Mather was physically active, pursuing hiking and mountaineering, often squeezed into a frenzied travel schedule related to his business and the parks. His work, travel, and tremendous physical energy exacted a heavy toll and contributed to his untimely death.

Mather recognized magnificent scenery as the primary criterion for establishment of national parks. He was very careful to evaluate choices for parks, wishing the parks to stand as a collection of unique monuments. He felt those areas which were duplicates might best be managed by others. Within the framework of "scenery," his preservation ethic covered such issues as the locations of park developments, provision of vistas along roadways, and the perpetuation of the natural scene. Mather always wished to have the parks supported by avid users, who would then communicate their support to their elected representatives. His grasp of a grassroots support system encouraged the rise of "nature study" and modern interpretation, as well as other park services, and was followed by increases in NPS appropriations. Mather was the first park professional to clearly articulate the policy which allowed the establishment of park concessioners to provide basic visitor comforts and services in the then undeveloped parks. His provision of creature comforts connected with park developments encouraged a curious and supportive public to visit the national parks. 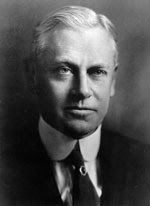 His life is well summarized — on a series of bronze markers which were posthumously cast in his honor and distributed through many parks:

"He laid the foundation of the National Park Service, defining and establishing the policies under which its areas shall be developed and conserved, unimpaired for future generations. There will never come an end to the good he has done . . ."

A wealthy, gregarious businessman, Stephen T. Mather came to Washington from Chicago in January 1915 as special assistant to Secretary of the Interior Franklin K. Lane for national park concerns. His vigorous efforts to build public and political support for the parks helped persuade Congress to create the National Park Service in 1916. Appointed the first NPS director in May 1917, he continued to promote park access, development, and use and contributed generously to the parks from his personal fortune. During his tenure the service's domain expanded eastward with the addition of Shenandoah, Great Smoky Mountains, and Mammoth Cave national parks. Periodically disabled by manic-depression, Mather left office in January 1929 after suffering a stroke and died a year later.

It is because of great forward thinking men like Stephen Mather that I was able to visit Yellowstone National Park and see something as beautiful as this waterfall. Thank you Mr. Mather. 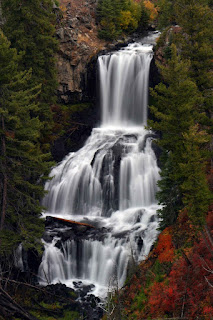