"What is this that stands before me?
Figure in black which points at me
Turn around quick, and start to run
Find out I'm the chosen one
Oh nooo!" - 'Black Sabbath' by Black Sabbath
"Oh, can it be
the voices calling me
they get lost and out of time
I should've seen it glow
but everybody knows
that a broken heart is blind
that a broken heart is blind" - 'Little Black Submarines' by The Black Keys

Oh yeah, I'm back at Lollapalooza. I am always excited to spend three days checking out live music. Today has been called Black Friday because the headliners are Black Sabbath and the Black Keys. I am a fan of both bands. I've seen Ozzy in concert and I've seen the Black Keys too. But I've never seen Black Sabbath live. So who did I watch tonight. You'll have to read on for that answer... 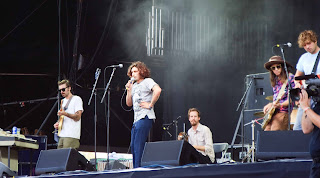 ...first up was The Growlers from California. They have a cool mix of influences that are musical and drug related according to their bio. I love their song "Gay Thoughts" so here it is.
I kind of liked the shot below taken through the mixing board tent. 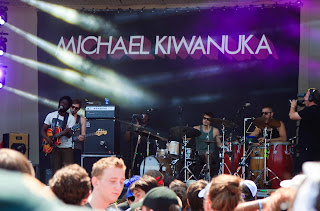 This is why I love Lollapalooza. I had never heard of Michael Kiwanuka before today. I was blown away by this British soul singer. 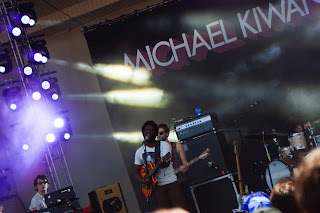 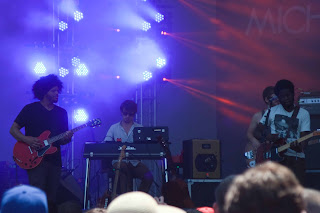 The band was fantastic. They had everyone grooving once they started playing. I loved the music and the songwriting. If you love good music, I highly recommend this band. 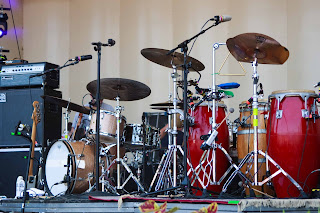 Again, another shot I took for me. 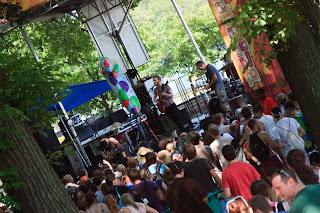 I stopped by to check out Kevin Devine on the BMI stage because I love songwriters that write lyrics that mean something. He sounded pretty good but I only stayed for a couple of songs... 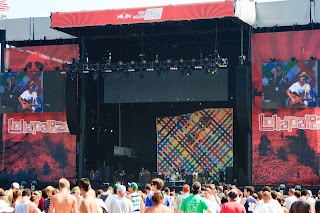 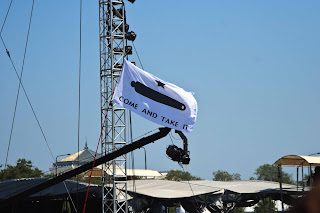 Can someone tell me what this flag means?

After watching the mellow sounds of Dr. Dog... 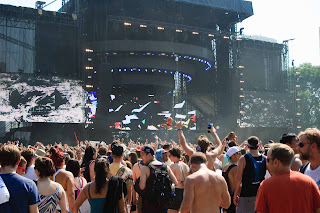 ...I stopped at Perry's to check out Zedd on the huge DJ booth stage. 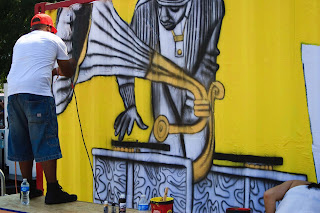 Then I stopped to watch the artists painting the shipping container at Perry's. 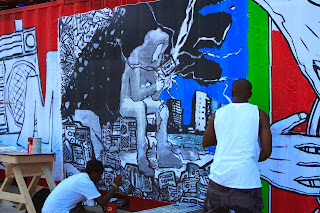 It looked like guest artists were adding their own thing to the existing work. 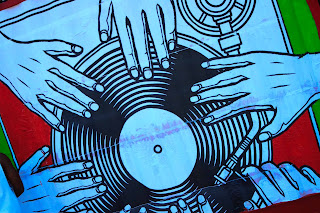 I enjoyed talking with the artists, then I met... 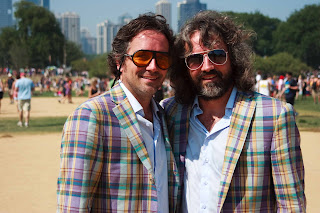 these two guys. They asked me to take a picture of them with a Black Keys fan. So we talked Black Keys for a few minutes, then I asked to take their picture because I was digging their suits. We continued to talk about music as we headed toward the Red Bull Stage for the Afghan Whigs set. When I headed to the bar for a beer, they showed their passes and headed backstage at the Red Bull Soundstage. Does anyone know who these dapper gentlemen are? 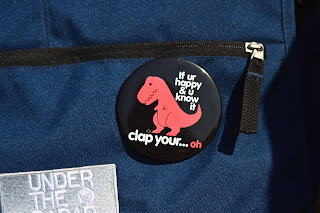 I spotted this funny pin while waiting for the Whigs to take the stage. 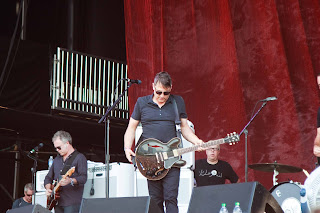 The Afghan Whigs, my favorite band of the 1990's...BTW I love the crowd reflected on Dulli's guitar... 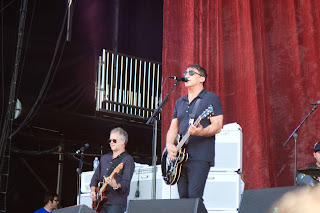 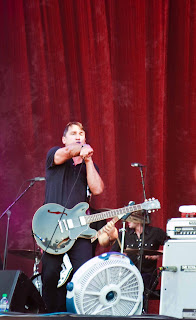 ...no band released 5 albums as consistently strong as this band. 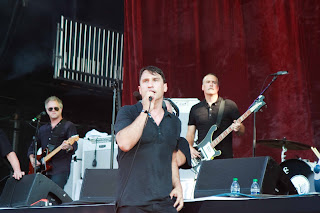 Greg Dulli & company sounded great today. I always thought their songs leaned toward a man's perspective. But I had three ladies next to me that sang along to every song, so I guess those tortured relationship songs can swing either way. 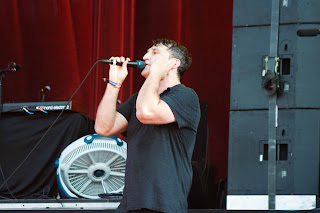 " I'll warn you, if cornered, i'll scratch my way out of the pen
Wired, an animal
The claustrophobia begins
You think i'm scared of girls
Well maybe
But i'm not afraid of you
You want to scare me then you'll cling to me no matter what i do
Tell you a secret
They shared a needle once or twice
I loved her, she loved me
We slept together a couple of times
You think i'm proud of this
Well maybe
But the shame you never lose

Infatuated with a lunatic and cornered by the muse
And it goes down every night
This must be what jail is really like
And i will scratch my way out of this pen, again

Lonely?
Maybe
Or maybe not
It all depends
Your ideal, your image
Your definition of a friend
If what you're shoveling is company
Then i'd rather be alone
Resentment always goes much further than it was supposed to go" - 'What Jail Is Like' 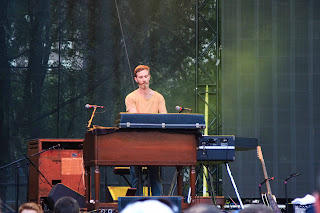 Like Monty Python used to say, "and now for something totally different"...Dawes.
On my way to watch Dawes, I checked out The Head & The Heart, The Shins and Band of Skulls. Each band sounded good but I thought "Nothing Is Wrong" by Dawes was one of the best CD's of 2011 so I really wanted to see them live. 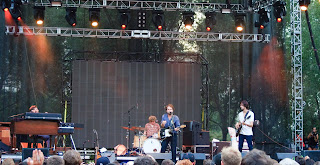 I was not dissappointed. They sounded great. I was surrounded by real fans because I got up close to the stage. More on that topic later. A group next me were dancing to every song and they kept swapping dance partners as the laughed and sang along. It was a cool Lolla moment for me. 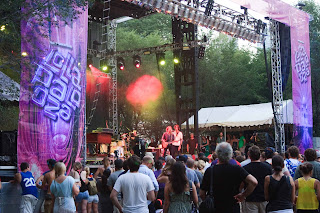 Dawes on the Google Play Stage. 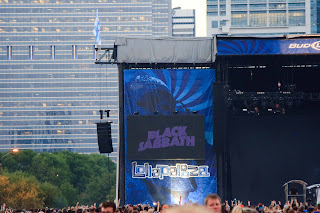 OH WHAT A DILEMMA. Do I take this one in a lifetime chance to watch Black Sabbath who I've never seen live or watch the Black Keys who I've seen twice. Really old washed up band or hot young band just hitting their prime? I watched Black Sabbath for two songs, Black Sabbath & The Wizard. 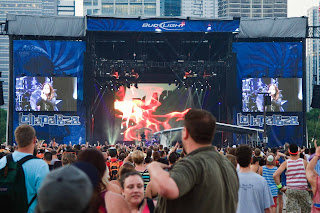 Then I headed to the south end of Grant Park to see the Black Keys.

The Black Keys rocked Chicago. Good choice on my part. 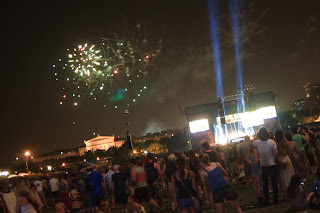 Fireworks from the Bears practice at Soldier Field... 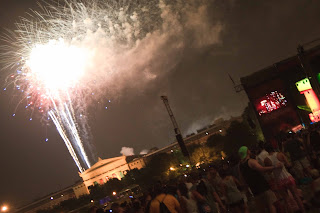 ...just added to the musical fireworks provided by The Black Keys. 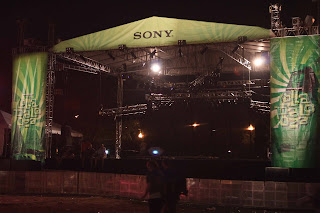 So if all the world is a stage, then what happens when the music stops. This old man is ready to go home. A fun day in Grant Park ends...with an empty stage.