August 5, 2012 Some Final Thoughts On Lollapalooza 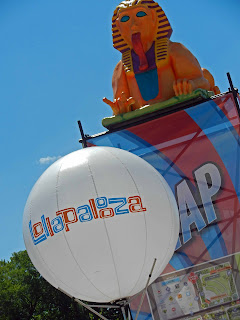 So today is the last day of Lolla. I really don't have any must see bands except The Gaslight Anthem and Jack White. At least it is a perfect weather day. 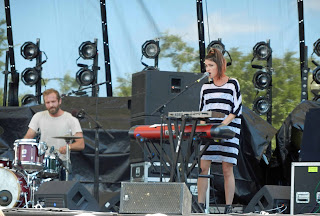 My first stop was the Bowerbirds... 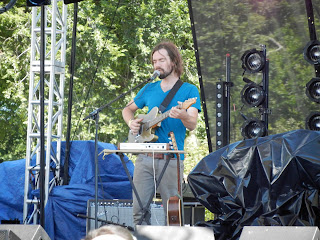 ..not much to listen to for my musical ears....lightweight synth pop. Pleasant enough for those that enjoy that kind of music. 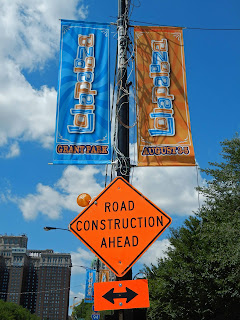 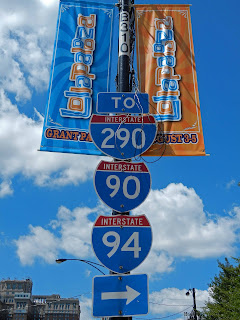 Out of towners must think this road takes you to every highway in Chicago.

This is a young punk band named Red Oblivion, they seemed, hmmm what's the word...young. But more along the type of music I enjoy. 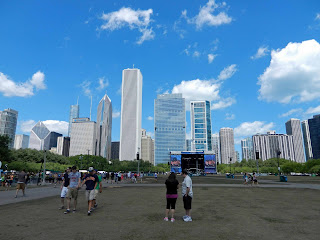 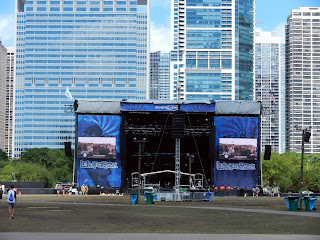 The north end of Grant Park, apparently very few of us got up early today. 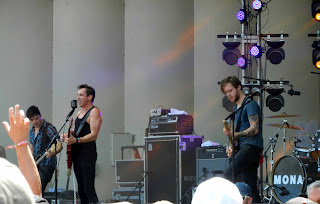 I really enjoyed the punk / rockabilly music that this band, Mona, played. The lead singer seemed to be a Joe Strummer fan...nothing wrong with that. 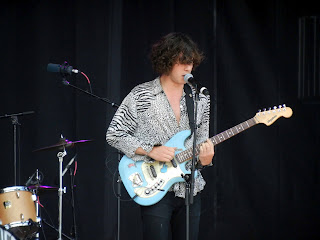 I watched Oberhofer for awhile...again just pleasant rock & roll, nothing special. I was beginning to think Lolla was losing it's appeal to me...but then.... 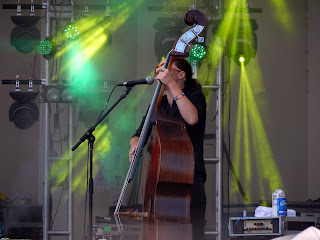 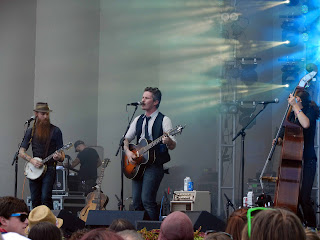 ...a rocking bluegrass / punk hillbilly band called 'The Devil Makes Three' just blew me away with their incredible set.

I saw this band open for either Flogging Molly or the Dropkick Murphys in the past but today they were just what this old man needed to hear. 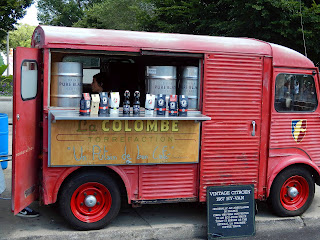 A cool old coffee truck. Lolla does have a great selection of food though I noticed more hamburgers and pizza choices this year. 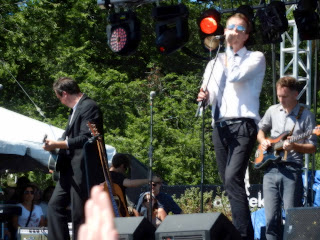 After listening to White Rabbits and Trampled By Turtles, I stopped by to see The Walkmen who played on the Sony Stage but I bet the kids in the crowd didn't even make the connection. They have some good songs, but something was missing for me. I started to head over to see Gary Clark Jr... 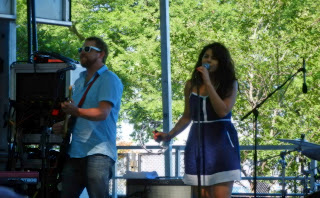 ...but stopped to check out Imaginary Cities who I really enjoyed, but I can't explain why. They were able to keep my attention...I guess that is all it takes today. I finally met up with my friend Brian at the Google Play Stage to watch The Gaslight Anthem. He's been coming to Lolla longer than me and he agreed this year wasn't as much fun. So it wasn't just me being an old man...wait Brian was there with his twenty year old son...so he is pretty close to my age...uh-oh. The Gaslight Anthem sounded good, but I am a fan already. I watched Of Monsters & Men, then checked out the hugely hyped Florence + The Machine...YAWN!!!! She has a great voice but wasn't using it today, though I did hear she recently tore her vocal chords so I blame it on that. She still seemed like a new millenium Stevie Nicks on stage so take that for what it is worth. Most of the crowd seemed to love their set. I'm just like the old guys in the balcony who hated everything on the Muppet Show. 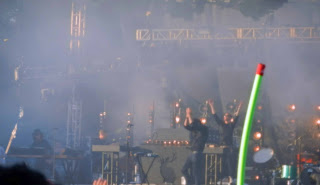 This is Miike Snow...the extra i wasn't for interesting. Again, not my kind of music. I need music to come from the heart or have soul or have great lyrics or be played by masterful musicians. Sorry Mr. Snow, at least the kids seemed to enjoy you. 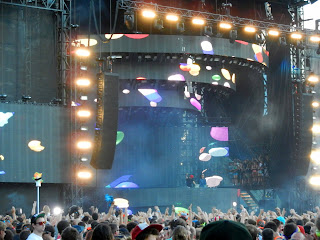 I am pretty sure this was Zeds Dead...a Pulp Fiction reference, of course I had to check them out. The DJ stage was packed all weekend long, mostly by people much younger and much higher than me.
I stayed for all of Jack White's amazing set. First off, he was louder than any other act all weekend. He sounded great so did his band. Then in the middle of his set, a whole new band replaced the first band...the new band was all females and they rocked too.  He could have played more White Stripes songs...small complaint.
So to wrap up my three days of music in Grant Park. It wasn't as much fun as past years. They sold more tickets this year and it seemed too crowded. If you were close to the stage, you were usually surrounded by real music fans. The further away...douchebags who couldn't care less about the band on stage. These people only came so they could say they were at Lolla. For the most part, I still enjoyed seeing the kids / young people get so excited about seeing bands they loved. After Jack White was finished, I was walking across the park when I heard a young girl tell her friends, "I know it's over but I can't stop dancing!". That made me smile all the way home. Other aspects, the food was still good but the prices went up by $2 -$4 for some items. One of my favorite moments happened at the Mercat a la planxa food booth. I ordered a steak sandwich and the cashier says, "cool shirt, I love Jackson Hole. Did you ski there?" After telling him I hiked in the Tetons, he said he was from Utah. I am going to Utah in September, so our conversation continues for about ten minutes. He tells me to hike at Goblin Valley State Park because it is his favorite. Then he gives me his card and it turns out I have been talking with the chef at Mercat, Cory Morris. For those that know me, if there's anything I love as much as live music...it is good food. So I guess I'll give Lolla another try next year. And if Perry Farrell stumbles across my blog, my requests for bands to play Lolla next year are Vintage Trouble and The Heavy.
﻿
Posted by Gregg at 7:34 PM