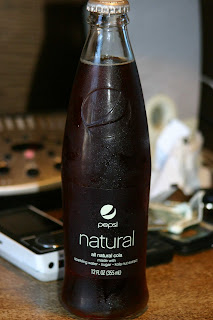 I don't want to make this a commercial for Pepsi. Hell no, Michael Jackson tried to do a commercial for them and they lit his head on fire. I don't like this Pepsi Natural that much. But I do like it. I tried it a few weeks ago when I saw Pepsi in a real glass bottle at a gas station in a Mexican neighborhood. If I'm given a choice I'll drink Pepsi over Coke. But I never see Pepsi in a bottle until now. It's called Pepsi Natural and is made with sparkling water, sugar and kola nut extract with some natural coloring ingredients. I've already posted how much I love soda in a glass bottle. This is pretty good stuff. I've had a few bottles and it goes down nice on a hot summer day. Now that I've done a Pepsi commercial just like Michael Jackson I hope I don't become overly fond of young boys. Now where is my on call doctor, I need some anesthesia so I can get some sleep.
Posted by Gregg at 3:53 PM