July 21 Why I Love Mexican Neighborhoods 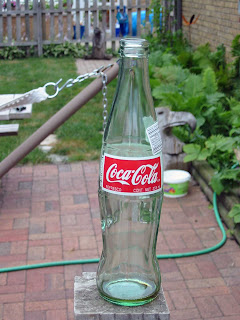 Yes, that is a bottle of Coke. No big deal you might be saying to yourself. You are wrong. Because in Mexican neighborhoods throughout the city, you can buy a glass, yes a real glass bottle of Coca-Cola. For years I have said that soda tastes better in a glass bottle. I truly believe it does. It stays colder longer. That is not the only reason. These bottles appear to be imported from Mexico. I say that because the ingredients are not printed on the bottle. They are listed on a sticker placed on the bottle. I actually read the sticker and discovered why Coke in an imported from Mexico glass bottle tastes better. It is made with sugar, not high fructose corn syrup which is used for soda sold to Americans. Mexican Coca-Cola...real sugar...real glass...real better.
Posted by Gregg at 1:38 PM