It should come as no surprise to anyone who has read this blog that I love music. Most of my earliest memories have music playing in them thanks to my parents who actually listened to good music and passed it on to me. I might have been the only eight year old white boy in 1973 who could sing along with Stevie Wonder's "Living For The City". So 37 years later, I find myself on the CTA's Red Line heading to Grant Park for Lollapalooza. Last year I went with my little brother, Georgie, and his wife, Marcy. This year it is just me. Sure I am a loser but that is fine with me because this summer has been a special kind of hell for me. The weather has been in the 90's all summer...that's the temperature and the humidity. It's been relentless and due to completely incompetent owners, we have been working 60-80hrs a week and some days for 24 straight hours...like last night. So after three months of having no life away from work, I desperately needed Lollapalooza... three straight days of nothing but music, scantily clad young women and more scantily oops I mean music...the rest of the world does not exist. Lolla is great for discovering new bands and checking out bands that you've heard on the radio but haven't seen live yet. The festival is very well run, good food is available at reasonable prices, there are several non music areas that include a farmer's market, where I ate at my favorite bakery everyday, the Bleeding Heart Bakery and an artists area where I picked up a great Coney Island poster from Michael Michael Motorcycle. But this weekend is all about the music, so to quote Sunday's early performer, Frank Turner..."Let's begin at the beginning: We're lovers and we're losers". 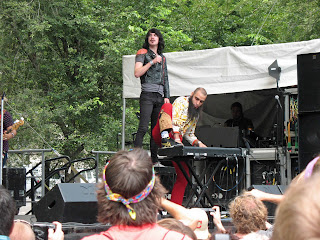 I got here early just to check out Foxy Shazam at noon. I only knew them from an online video for "Oh Lord" but I loved it so much I dragged my tired ass to Grant Park early today. Foxy Shazam was worth it. They were crazy on stage and energetic as any band I have ever seen. The crowd was completely into them. Their half hour set was not enough. What a great start to Lollapalooza.  RIYL-(Recommended If You Like) - crazy ass lead singers, Freddie Mercury like vocals, high energy anthem songs. 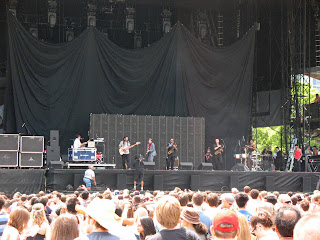 I walked down to the south main stage and caught a few songs by Balkan Beat Box. They had the crowd dancing and I enjoyed what I heard especially the politically charged songs.  RIYL - world music, horn sections, dancing to cool music with great socially important lyrics 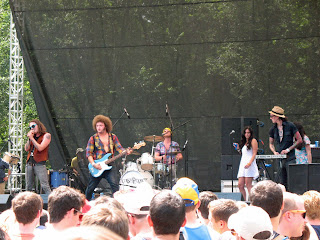 The Lolla program was very useful for deciding which bands to check out by reading the description of each band. The Constellations seemed interesting so I stopped to check them out. I stayed for their whole set. They were impressive. The lead singer had a hippie Jim Morrison/Tom Waits way about him with some funky soul added into the mix. I even recognized their song, 'Felicia'. Their set included a bunch of songs that seemed to be influenced from a wide musical spectrum which I admire in a young band. RIYL - different musical tastes combined into a fresh sound, Tom Waits
I had some time to kill before the Drive By Truckers played, so I checked out Jukebox The Ghost a less clever and less talented Ben Folds Five knockoff but I didn't dislike them as much as it sounds with that description. American Bang were real good, part of that new southern rock sound like Kings of Leon. I caught the last few songs of the incredible Mavis Staples' set. She brought out Jeff Tweedy of Wilco for a couple of songs. That was cool. He is producing her latest CD and they sounded great together. Nice to see an older legend draw so many young fans. The kids attending Lollapalooza seem to really know their music and show respect to those that deserve it. 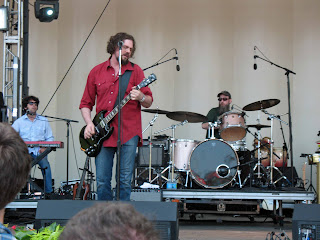 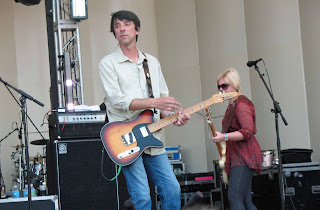 I've been a fan of the Drive By Truckers ever since my friend, Cary turned me on to their "Pizza Deliverance" CD. But today was the first time I'd seen them in concert. They were impressive but I think I'd like them better in a dark rock'n'roll shit hole like the Riv or the Metro. RIYL - smart southern rock songs, bands with several singers and songwriters 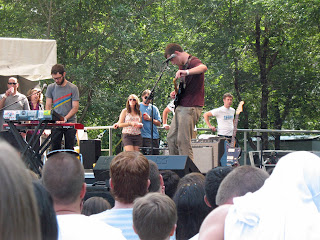 I really wanted to like Cymbals Eat Guitars because the program said they are often compared to Pavement & Modest Mouse. That is high praise in my musical book. Unfortunately, the guitarist spent most of my time there tuning his guitar. I had to get to the south stage to catch Devo. 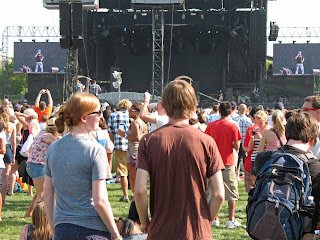 Yes, this is as close to the stage as I could get for Devo. I stuck around for a few songs and heard them play "Whip It". Then like most of the fans I left. I grabbed some spicy punk rock popcorn shrimp for dinner. Very tasty. I didn't include a link to a Devo video because if you don't know them, you must stop reading about Lollapalooza right now. I stopped by the Semi Precious Weapons stage just in time to be called a "fucking cunt" by the flamboyant lead singer and as I learned later...after a topless Lady GaGa stage dove into the crowd. Ahhh, the story of my life...wait, that will be played tomorrow. I did catch the last of the New Pornographers set at the north stage because I wanted to grab a good spot for the Black Keys. The Dirty Projectors were playing across the lawn but honestly I didn't hear anything that great. I sat on the grass getting a contact high from the group of kids next to me who were smoking the fattest joint I saw all weekend. All of a sudden one of the young girls fall down passed out. The guys start laughing and the rest of the girls get mad, pick her up and walk away. Never did see the girls again, the guys stayed and rocked out to the Black Keys. The most important part of this story is when she fell, one of the guys joked "don't smoke the brown pot". I had to respect kids that know their rock and roll history. After that excitement I got bored and took these pictures. 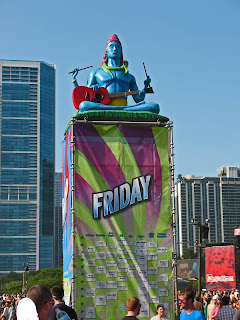 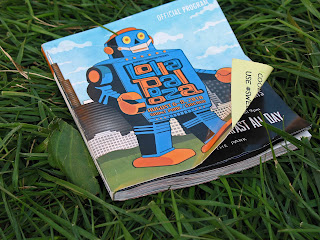 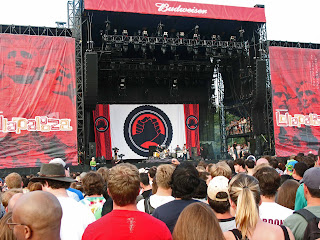 The Black Keys had some sound issues early in their set but they rocked the place with their grungy blues style. Definitely a highlight of the day for me. RIYL - music that means something, hard rocking blues, songs written by a guy that apparently has never been in a good relationship 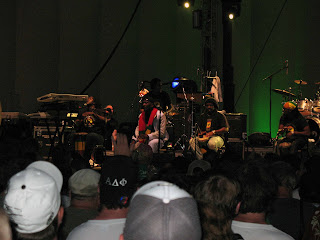 After the Black Keys I was exhausted, I was thinking about leaving. As I walked by the Petrillo Bandshell, Jimmy Cliff was just starting his set. So I stopped to check him out. Good idea or dumb luck, who cares. Jimmy Cliff was the best performer I saw all day. I was blown away by him and his amazing band. Here's the details. I was way in the back at first. A college age kid lit up a bowl, took a hit and held it out for his friend. Just then a pretty hot woman closer to my age than his, walks by, grabs the bowl, takes a hit and the kid doesn't say a word. She takes another hit, grabs the younger man and blows the smoke into his mouth while kissing him, then she walks away. The kid stood there stunned as I and his friends just laughed. Trust me the party was just starting. The crowd was dancing and singing louder with each song. I kept moving closer as some people left to catch the main acts of the night. The hardcore reggae fans stayed and were treated to one of the greatest shows I have ever witnessed. Jimmy's energy and positive vibe was contagious and impossible to resist. Maybe I was just in the right frame of mind at the right time but Jimmy Cliff blew me away. RIYL - reggae legends, great performers, social commentary mixed with a positive message

I watched Lady Gaga for a couple of songs. It was more theater than concert. She was attacked by what I assume were 'Fame' monsters and she was covered in blood when I left to check out the Strokes. I only stuck around for a few songs. The Strokes came out late, that stage, same one as the Black Keys, still had sound issues and I was waaay in the back. The Strokes definitely had twice the crowd Lady GaGa had. I wasn't impressed enough to stick around, so even though I am a fan of the strokes. I am also old and tired. So I left.