It's the annual Flogging Molly Green 17 Tour. I have gone to this show just about every year for the past ten years. I have loved this band since I saw them open up for the Mighty Mighty Bosstones many years ago. Unfortunately, the band announced tonight that this was the last Green 17 tour. 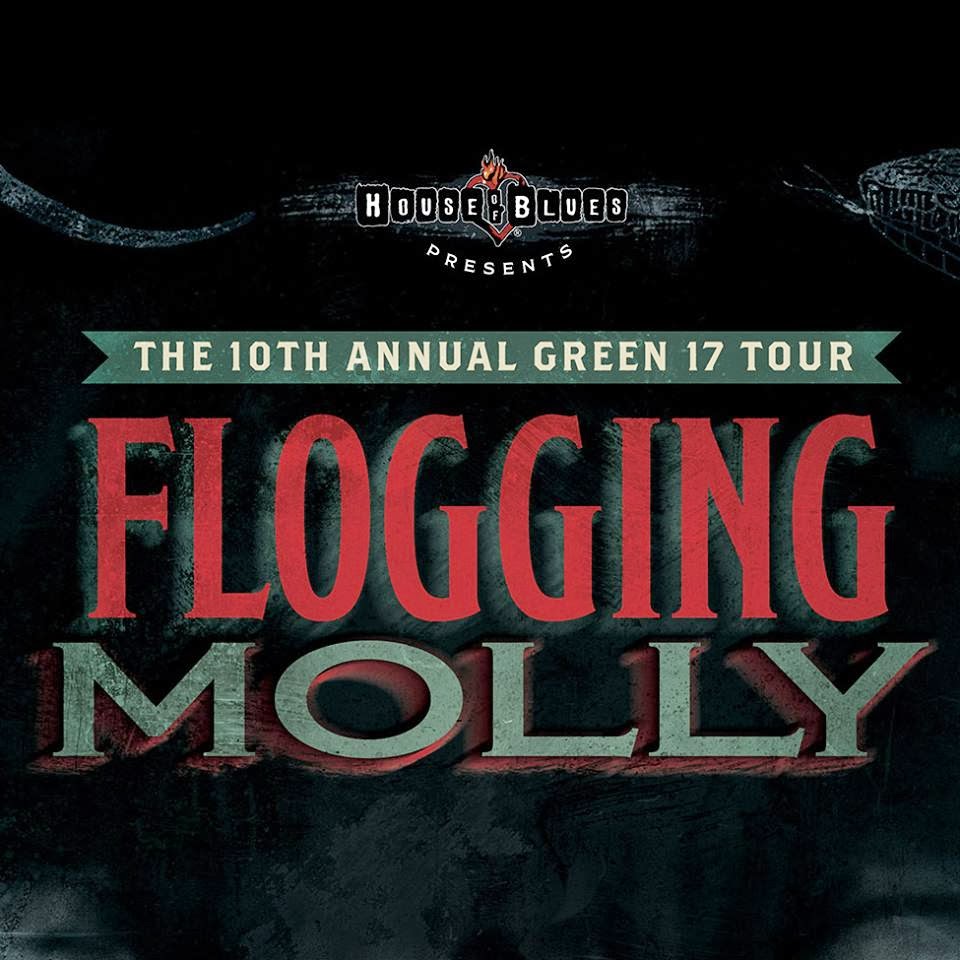 Tonight my sister-in-law Kimmy is going to the show with our friend/sister-in-law Patty. We met at Armour Square Park and walked to the Red Line. 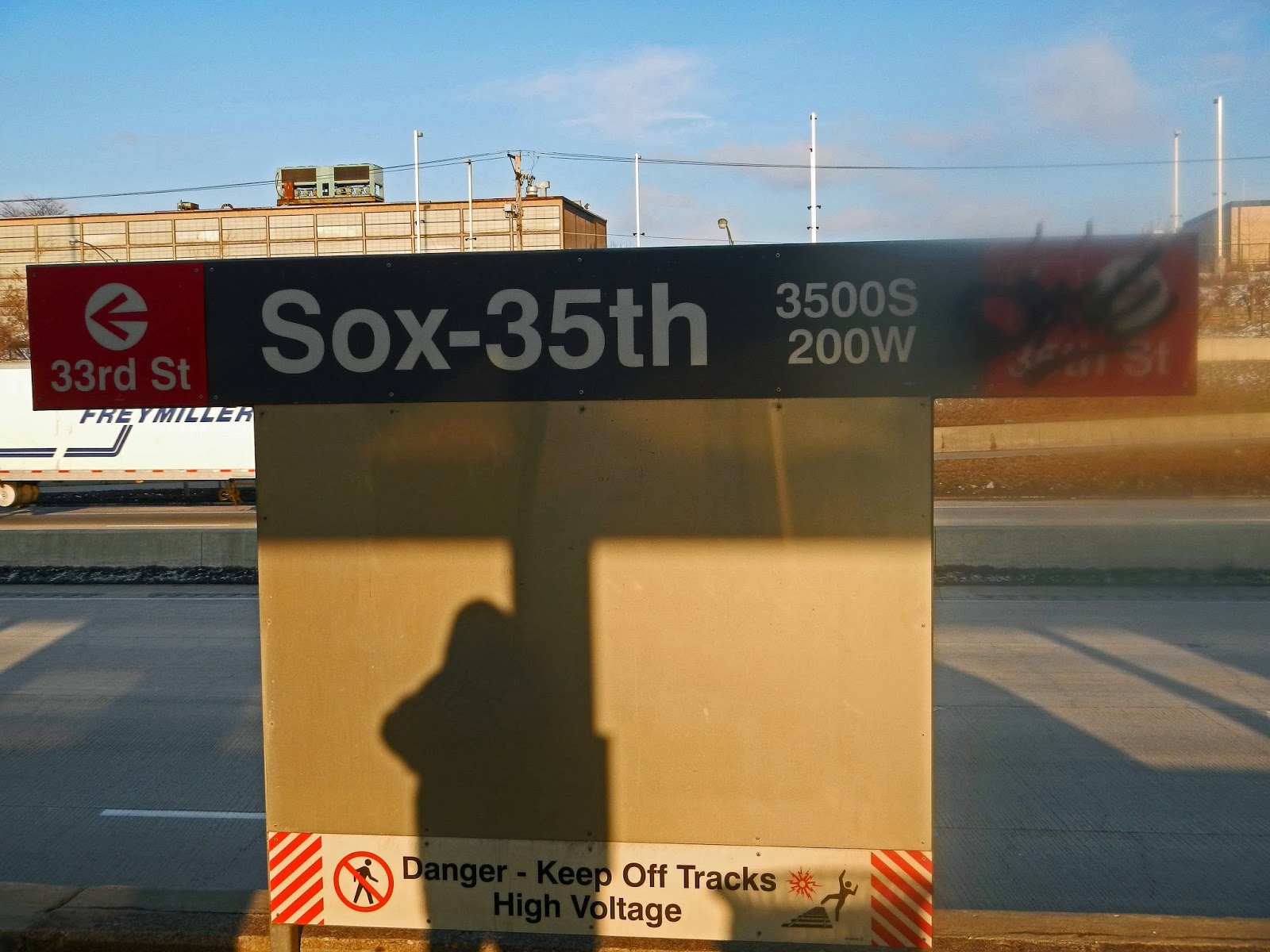 We had a very tasty dinner at Pizzeria Rustica on Sheridan just south of Irving Park. We split a Margherita Pizza for an appetizer, then I had a shrimp and mushroom pasta in a cream sauce...a heavy cream sauce...don't get me wrong...it was very good...but not what you want to eat before a night of drinking and dancing. We got to the Aragon before the doors opened, so we walked up Broadway to the Fat Cat bar to have a beer instead of waiting in the cold for the doors to open. We passed the long closed and long rumored to reopen Uptown Theater on the way. 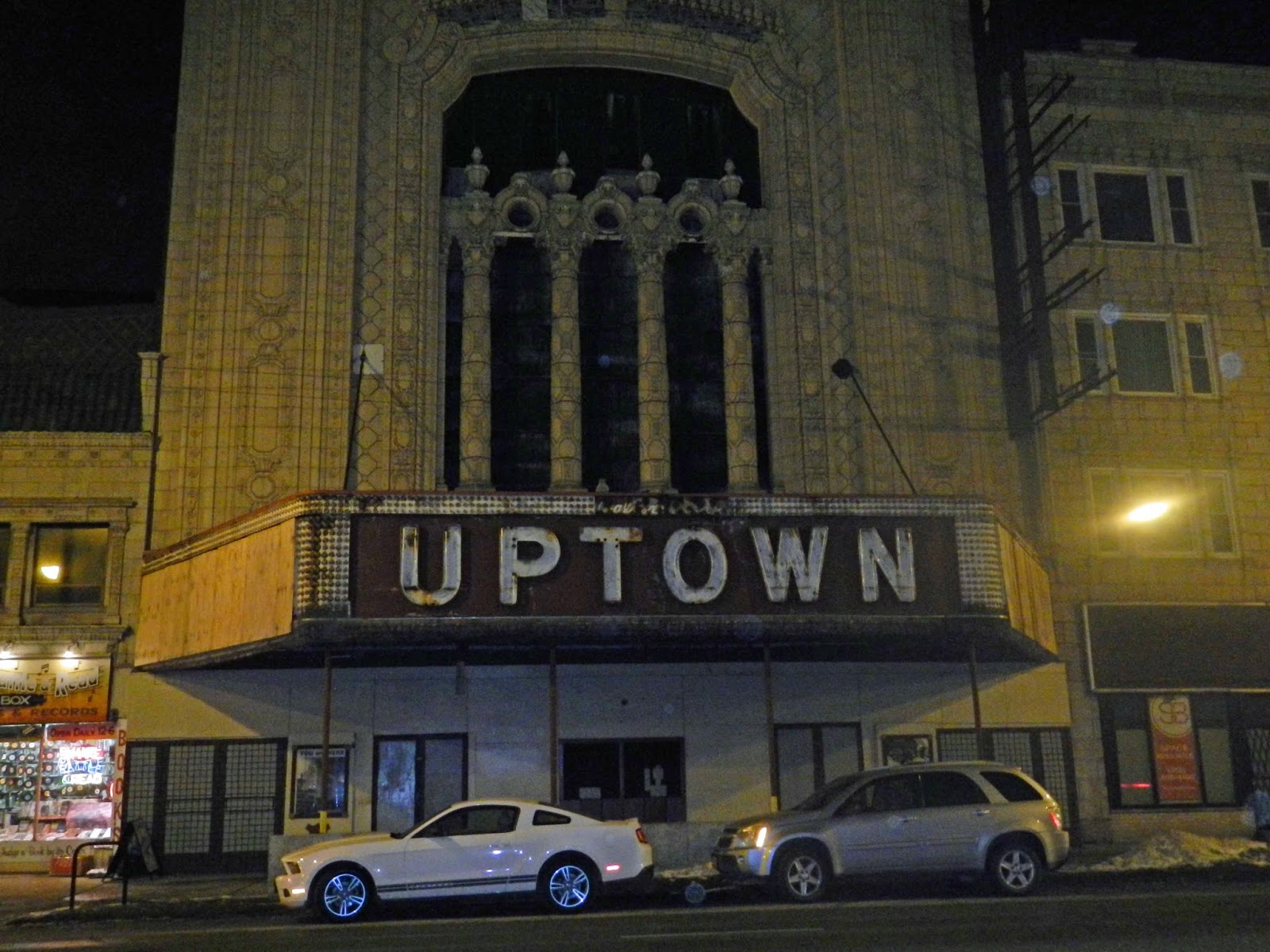 An unannounced opening act hit the stage as we walked up the stairs of the Aragon. They opened with a 2 Tone version of The Munsters Theme Song. I recognized The Crombies as soon as I saw them. Chrissy & I loved them at Riot Fest last fall. These guys are a Chicago band that mixes ska, rock and 2 Tone music. Great live act that almost forces you to dance while they perform their catchy songs. 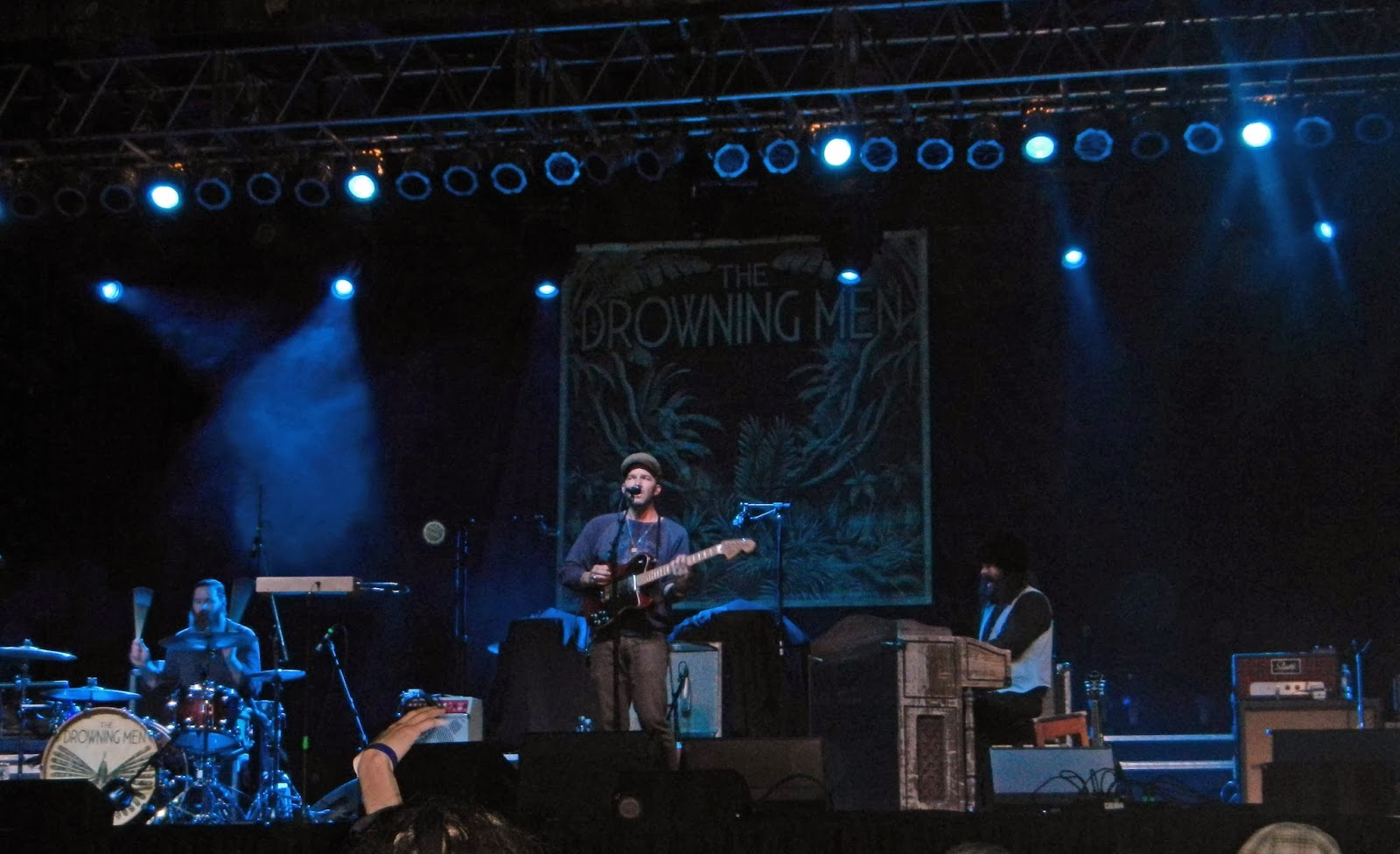 The next band was The Drowning Men from Southern California. It's hard to describe this band. I guess indie rock best describes them. They have their own type of sound. Sorry for lame review, I really did enjoy listening to them. But truth be told, I was getting really pumped up for Flogging Molly. The energy on the main floor at the Aragon was making me think that this was going to be something special tonight... 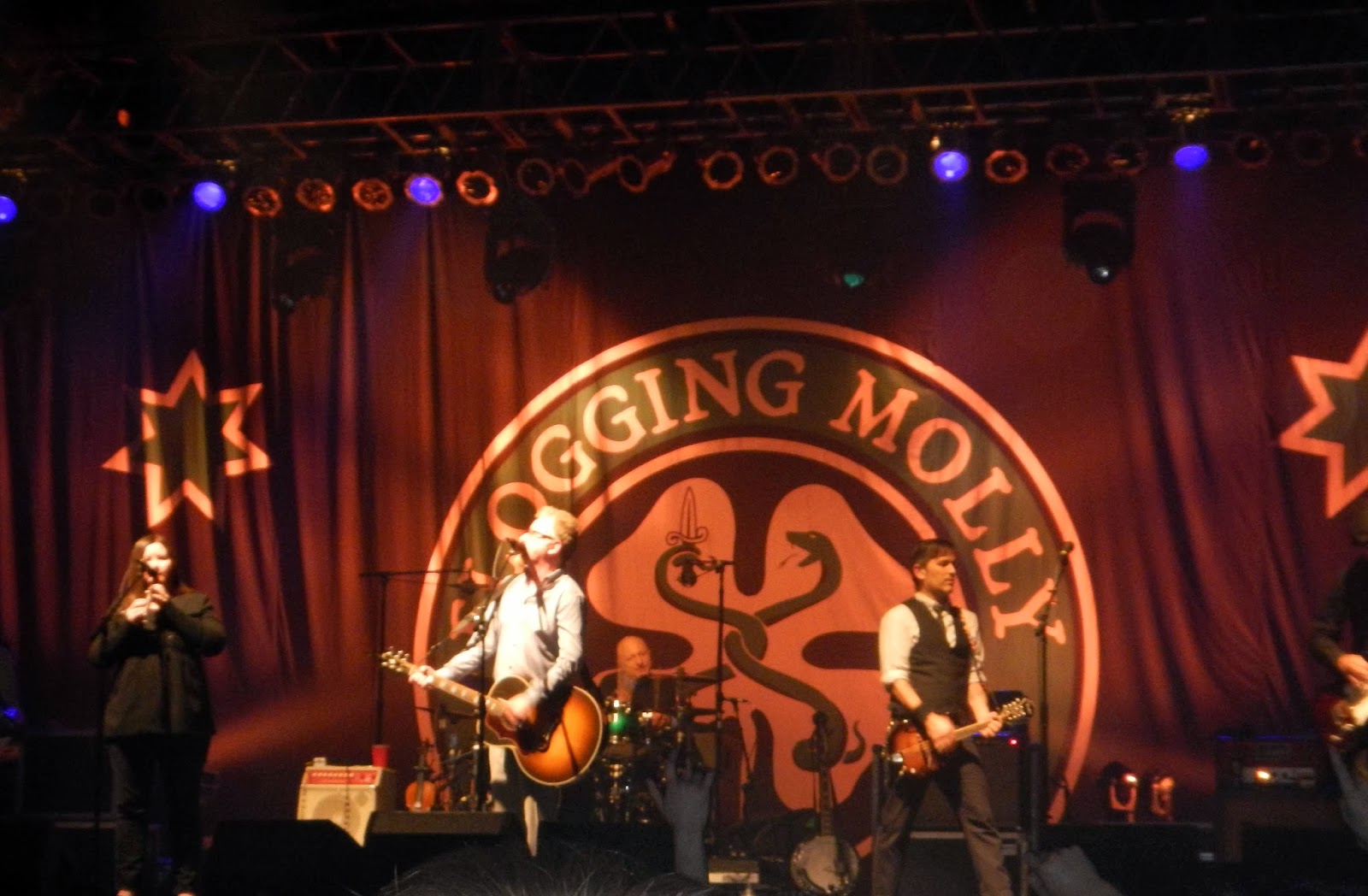 ...and it was. Flogging Molly never disappoints. I probably have seen them over a dozen times and can't remember a bad show. Tonight was an exceptional show because the band and the crowd were having a great time. We were just past the main mosh pit at center stage. Whenever a fast song was played, complete mayhem...moshing, dancing and singing along. A slow song had everyone with arms across shoulders swaying and singing along. The singer Dave King has perfected being a performer with stage presence. In between songs he told stories, thanked the crowd, goofed on people and called us "bastards" every chance he could. Every member of the band plays the songs amazingly...doesn't matter if it is a furious punk song or a slow thoughtful song...this band can do no wrong. Except for not playing "Rebels of the Scared Heart". Sorry FM, but it is one of my favorite songs. 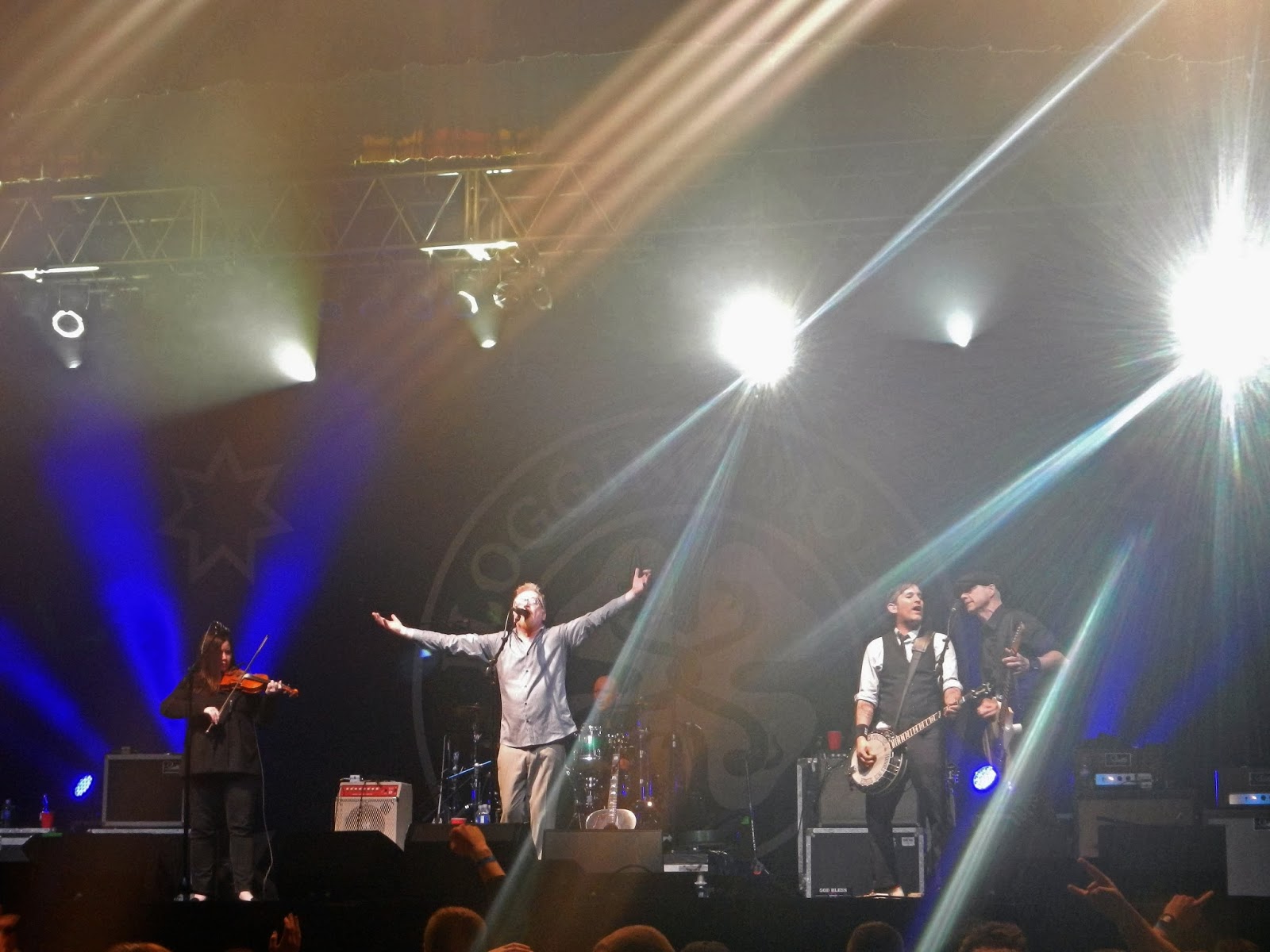 Flogging Molly mixes Irish folk music with a punk attitude. I've said this before about bands that I like but if you enjoy going to concerts and checking out bands...Flogging Molly is a must see band... 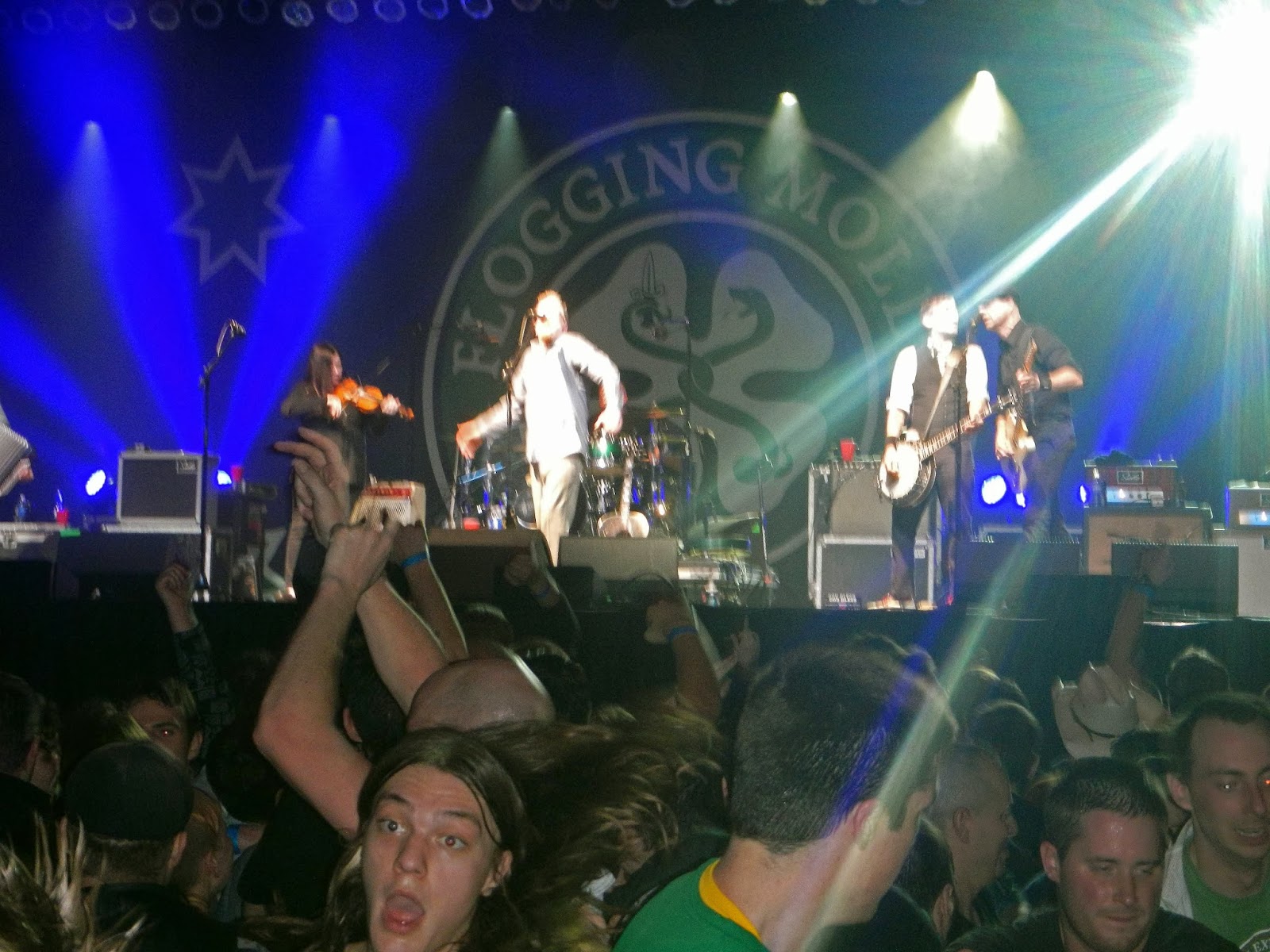 ...and trust me on this...get up front and jump into the mosh pit for a few songs...I think I jumped in for the second song of the night...it was a bit surreal because I watched the kids jumping around during "Wailing Wall" with a smile on my face and then "No More Paddy's Lament" started and all of a sudden I was in the mosh pit. At least that's how it seemed to me...and I loved it. Of course after one song I had to leave because I could barely stand. But once I caught my breath I jumped back in several times during the show. During the encores I was back in for "Black Friday Rule" and "Seven Deadly Sins" then I sang the finale, "If I Ever Leave This World Alive" with my arm over Patty's shoulder so she could hold me up. Thanks Patty for singing along with me and for being there to keep me from falling. 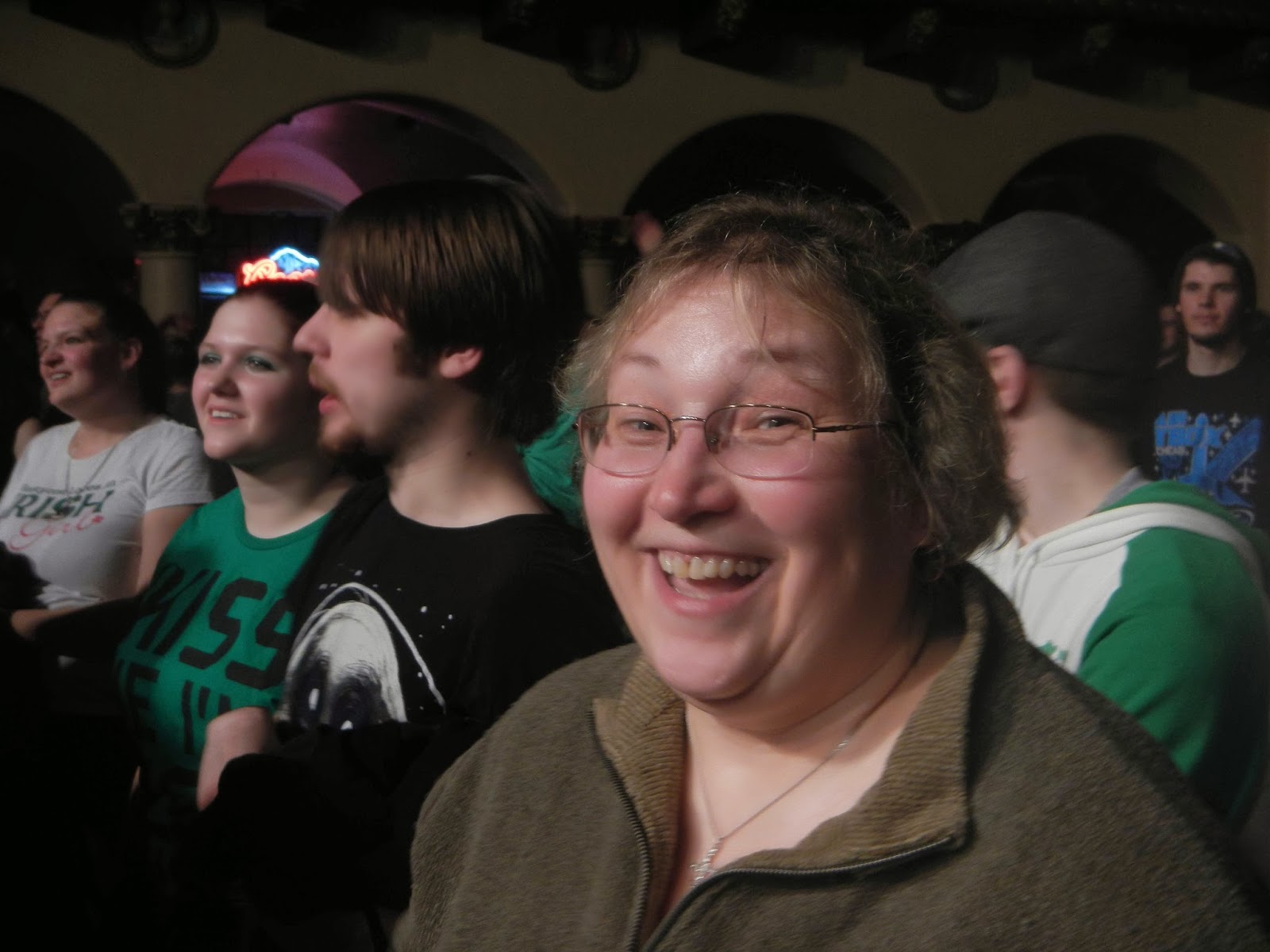 I was gonna ask if you enjoyed the show, but after seeing that smile...I had my answer. 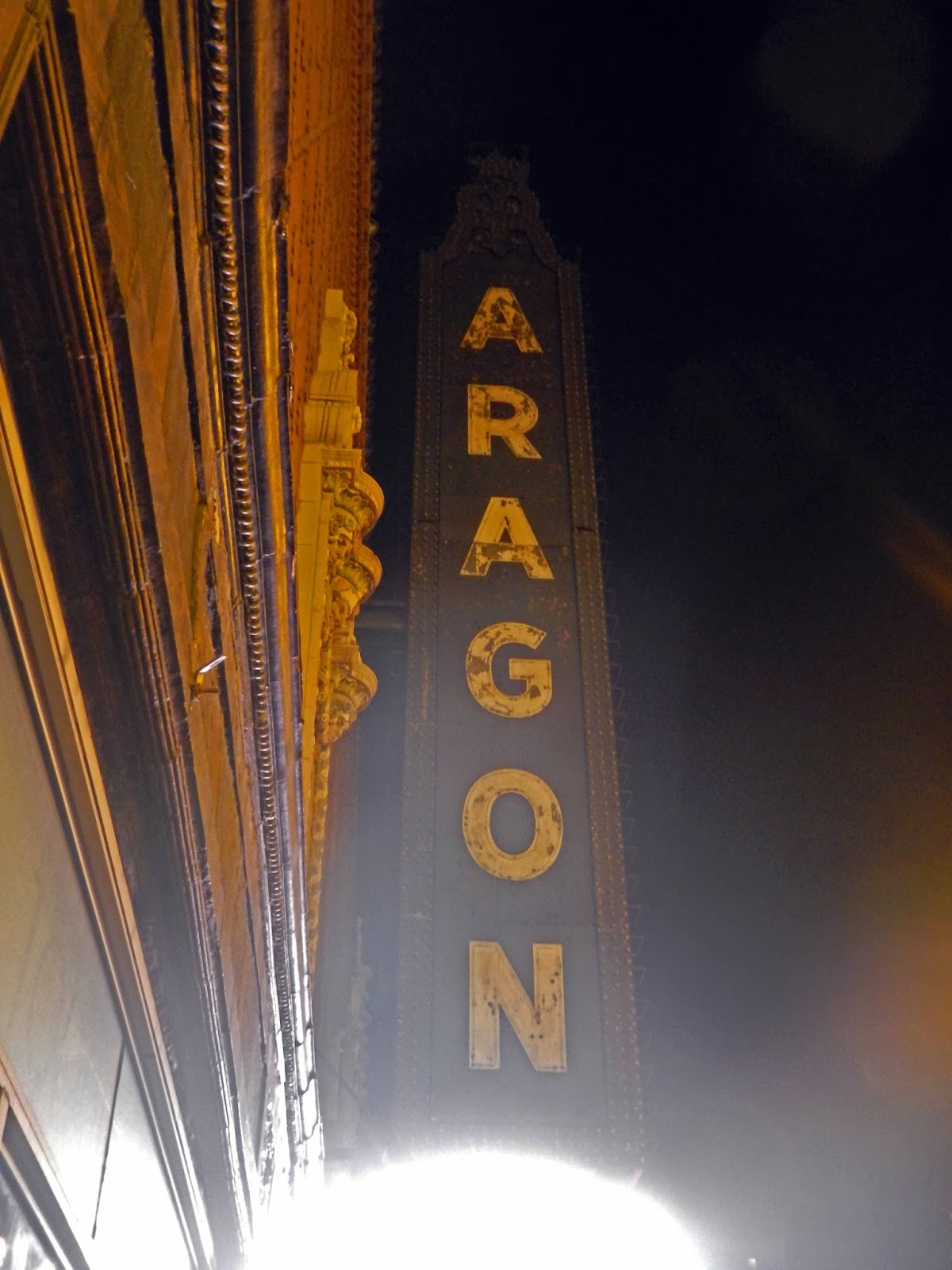 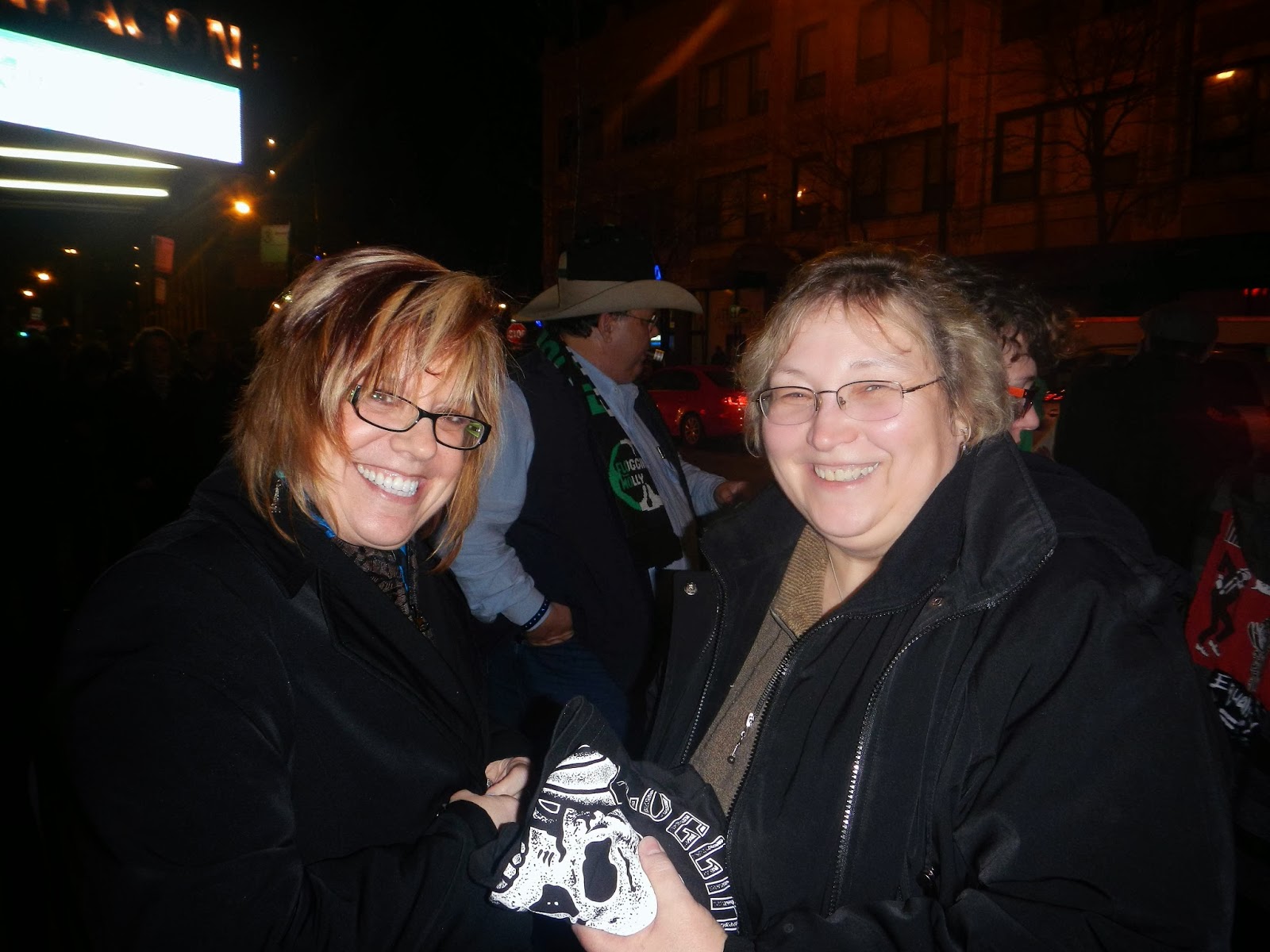 It was all smiles on the street after the show. We walked down to Wilson & Broadway to grab a slice of pizza before jumping on the Red Line. 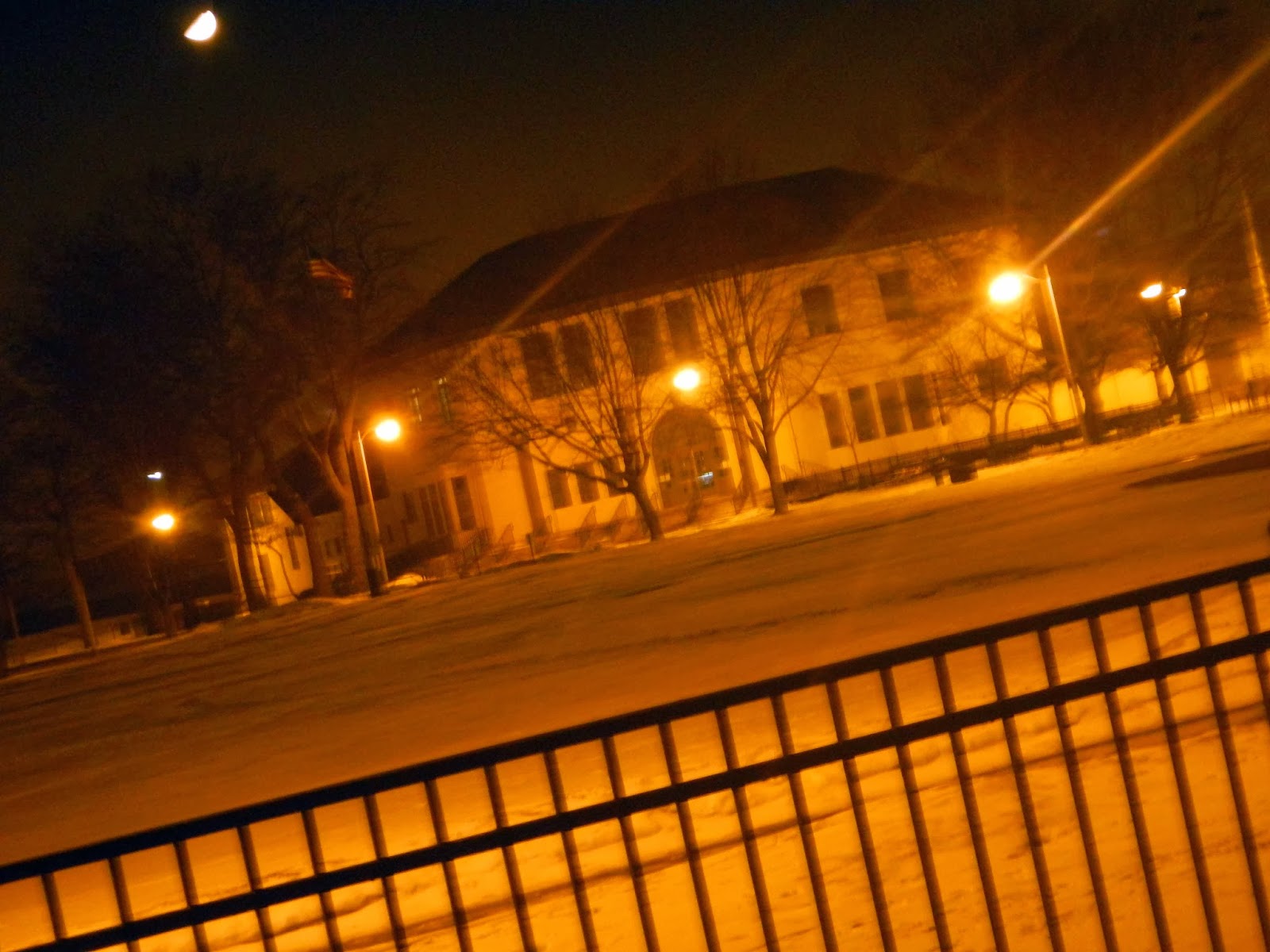 Armour Square Park had an eerie snow covered glow at one in the morning and a perfect half moon above it. 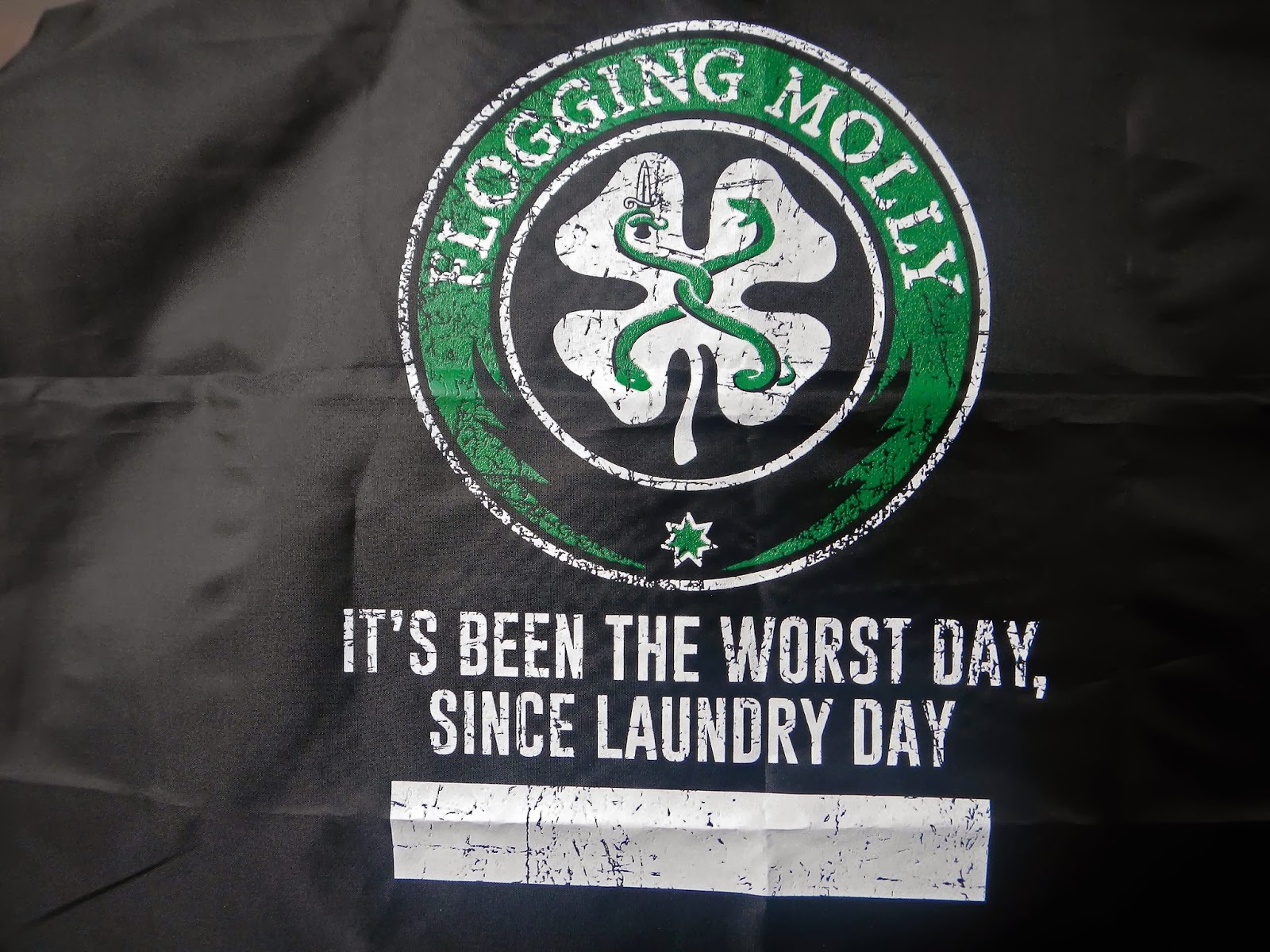 This might be the coolest concert swag I ever bought...my own Flogging Molly Laundry Bag. Actually I did not buy it...Thanks Kimmy.
Posted by Gregg at 7:15 PM