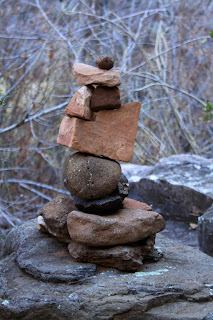 There are times that we all look for a little guidance, help or a sign. Some of my best days are when I have no plan and just go, getting somewhat lost actually. Sometimes a little sign to point you in the right direction can be very helpful, like these rock cairns. The trails across desert sand or along solid rock can disappear real fast, so I am grateful for these little rock cairns that show you the way. This picture was taken on the Allens Bend Trail along Oak Creek. I began my day with this short hike along Oak Creek just to stretch my legs. I am driving up to the Grand Canyon and plan to stop along the way at several places depending on time. This little hike was full of surprises, Oak Creek was flowing strong with snow melt from the mountains, the rising sun lit the Oak Creek Canyon perfectly and I stumbled across a small waterfall in Casner Canyon along the way. 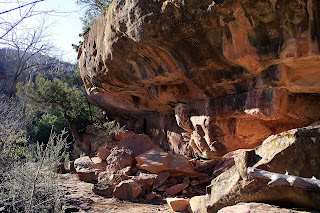 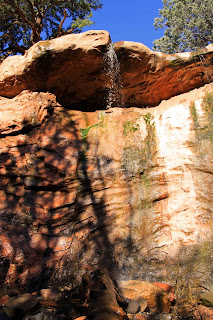 I continued my drive north through Oak Creek Canyon which was as beautiful as it is described in every guide book.. I began to see more snow on the mountain tops as I continued my slow elevation climb on this trip. I started out at 1100ft in Phoenix, was at 4400ft in Sedona, passed a 6000ft sign driving out of Oak Creek Canyon and will end up over 7000ft at the south rim of the Grand Canyon. I am a sucker for scenic turnouts... 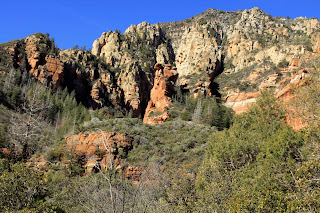 ...so it took longer than expected to make it to the West Fork Trail at the north end of the canyon. The entrance to this side canyon was incredible. I was really looking forward to this 6 mile hike. Unfortunately the small stream that must be crossed by hopping across on the rocks was flowing well above those rocks. I was going to attempt the crossing barefoot, but was advised against it by some German hikers who had the same idea. I guess the water was extremely cold and the rocky bed was very slick. I played in the snow for a bit, really just throwing snowballs in anger at the 200 foot high canyon wall across the stream. 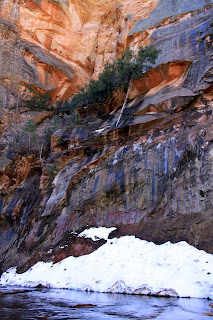 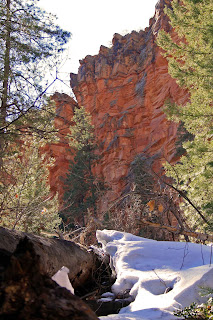 Now I have some extra time, so I decide to drive up to Sunset Crater Volcano and Wupatki National Monuments. Somehow, I get lost in Flagstaff and find the original Route 66 through town. It was like the Stephen King book, "Christine". As I drove Route 66 , the years were turning back to the 1950's. What a great stretch of road, the old mom & pop motels, roadside diners like the Grand Canyon Diner, oddball tourist trap stores & museums. Once again, I loved getting lost. I even drove by the Amtrak station which I had been to several times as a kid taking the train to California. At Sunset Crater Volcano, I hiked up the lava & snow covered Lenox Crater Trail. 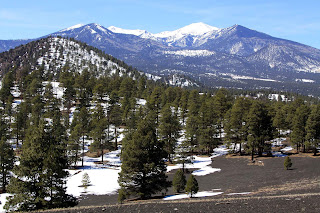 Stopped at the Bonito Lava Flow to watch a group of kids try to hike across it. 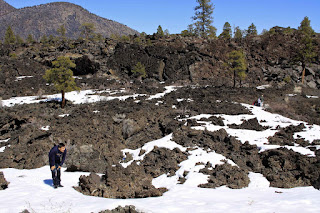 Then I hiked along the Lava Flow Trail but parts were closed due to the snow. 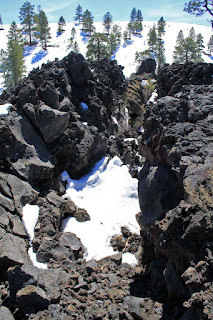 That is the Sunset Crater Volcano in the background. Sometime around the year 1064, this volcano blew one billion tons of  'extruded material' over an 800 square mile area. That created a 300 foot deep crater on top of the volcano. 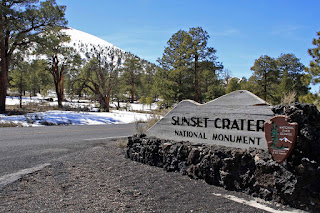 Onward to the ruins of Wupatki National Monument in the high desert of the Colorado Plateau. 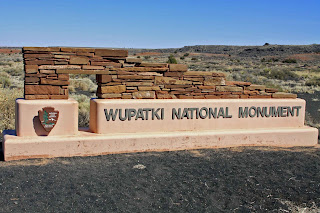 The first stop is the Wukoki Pueblo. "The original grandeur of Wukoki is evident today. There were three stories in what seems to be a tower. A total of six or seven rooms may have been home to two or three families. An open area adjacent to the tower was a plaza used for daily activities, pottery making, basket weaving and other chores. The plaza was enclosed by a semicircular parapet wall" - taken from NPS website. 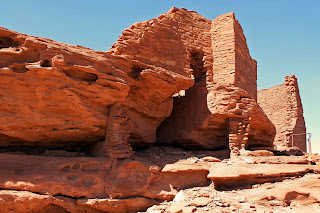 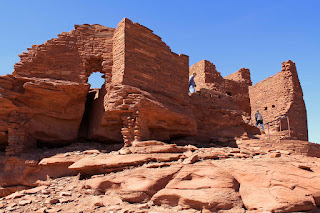 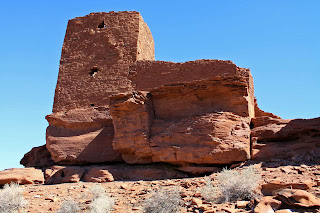 After a quick stop at the visitor center, I toured the Wupatki Pueblo which was undergoing some stabilization construction. "People gathered here during the 1100s, gradually building this 100-room pueblo with a community room and ballcourt. By 1182, perhaps 85 to 100 people lived at Wupatki Pueblo, the largest building for at least fifty miles. Within a day's walk, a population of several thousand surrounded Wupatki" - taken from NPS website. 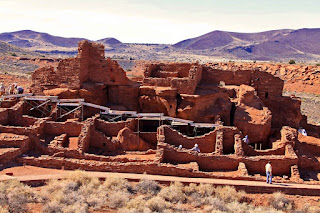 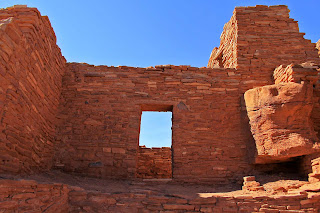 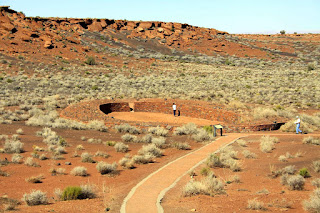 Go ahead, call me a geek. I am proud to admit that I love seeing historical sites like these. I am especially amazed that no one knows for sure what caused these people to leave this area. The architecture and farming abilities of the Sinagua Indians have to be admired. Below is the Citadel Pueblo, you are allowed to walk into these ruins. 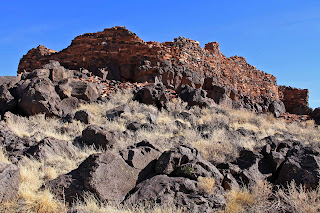 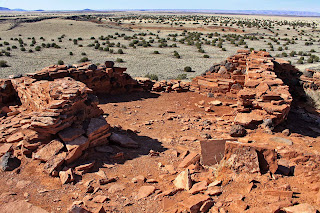 My last stop at Wupatki was the box canyon dwellings of the Lomaki Pueblo. 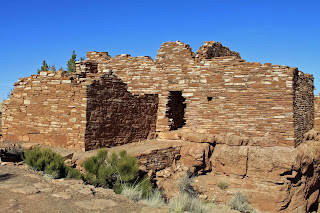 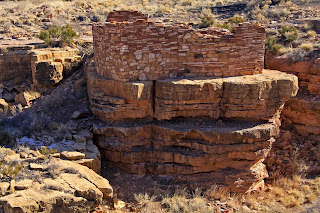 After an extremely depressing drive through part of the Navajo Nation, I arrived at the east entrance of the Grand Canyon National Park. I stopped at the Desert View overlook. Finally my first look at the Grand Canyon. Yes, it is amazing to actually see it. Over the next couple of days, I'm sure I heard that repeated in many different languages. There really is nothing else like it in the world. 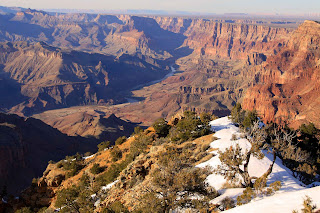 I also stopped at Grandview Point because I had planned on hiking into the canyon on Grandview Trail. The park ranger told me I would definitely need crampons due to the snow and ice on the very steep trail. After looking down the trail, my brain told me, "No fucking way we are hiking down that trail, fat boy!". Now I am hoping to hike the Bright Angel Trail, but not feeling very confident. Oh well that is for tomorrow, tonight I need dinner and some sleep. 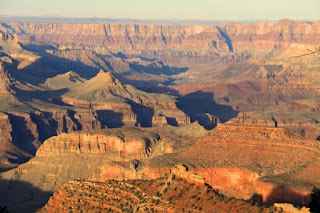