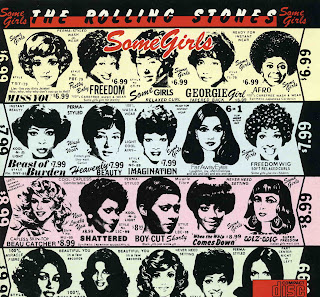 Back in my youth, 1978 to be exact, I won a call in contest on the most popular radio station at that time. It was 97.9 FM, better known as The Loop. The station is still called the Loop and it pretty much plays classic rock from the late 70's era. But this blog isn't about radio stations, it is about winning an album, an actual vinyl album the kind that spun at 33 and 1/3 RPM. My mom was in the kitchen and heard that I won. I was given a choice of several albums and I chose 'Some Girls' by the Rolling Stones. My mom said no immediately. So I chose 'Jazz' by Queen. My mom said the Stones' song 'Some Girls' was offensive that is why she didn't want me to have that album. What the fuck did I know about girls or offensive songs? I was only 13 years old that summer. I thought Queen was a cool name for a band. At the time, I had no idea it was a reference to the lead singer's sexual preferences. I do remember the Rolling Stones taking some shit in the media about that song but I don't think it was ever a popular song. I am not sure I ever heard the song or if I had, I didn't listen closely to the lyrics. So today, I decided to listen to the song while running errands. I know 30 years have passed but I didn't find the lyrics to be offensive. I'll admit I don't typically get offended by lyrics to a song. I'll also admit I still know don't much about girls but I do know that Freddie Mercury was a queen. I also know I still love music and the Some Girls album is still very good. It seems like a musical love letter to a then decaying New York City. Give it a listen and let me know if you agree.

Some Girls by The Rolling Stones

Some girls give me diamonds
Some girls, heart attacks
Some girls I give all my bread to
I don't ever want it back

So gimme all your money
Give me all your gold
Let's go back to Zuma beach
I'll give you half of everything I own
Posted by Gregg at 6:10 PM