Waterton Lakes National Park is in Canada on the border with the United States. Glacier National Park is just below Waterton on the American side. Together these parks form the Waterton-Glacier International Peace Park. You can hike across the border here although since 9/11 it is strongly discouraged. Anyway we woke up early to another beautiful day for this time of year and drove along the Red Rock Canyon Parkway. 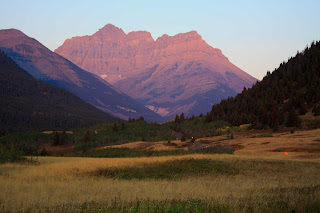 The sun was just beginning to rise over the mountains to the east as we drove west to Red Rock canyon.﻿ 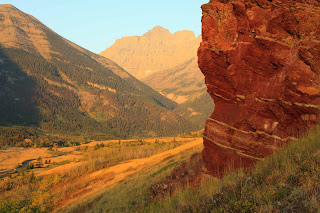 I got out along the way and hiked up to get a better view of this very scenic drive. 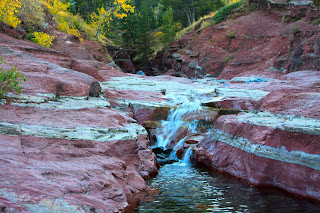 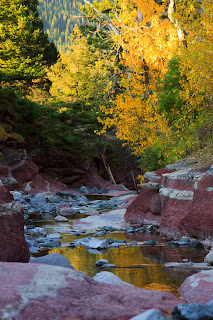 ...we hiked in the canyon and above it. 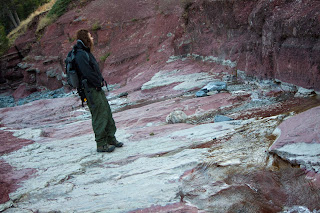 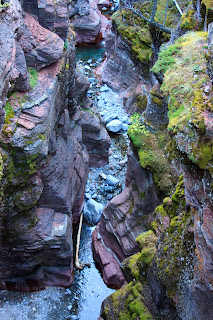 Unfortunately, the pictures do not include the all the things that make hiking out here so worth the effort...the sound of water cascading over the rocks...the warmth of the sun...the calls of the animals and birds...and most impressive is the sound of silence. Sometimes all I hear is my fat ass breathing hard as I hike uphill...I love it when I hear nothing at all. 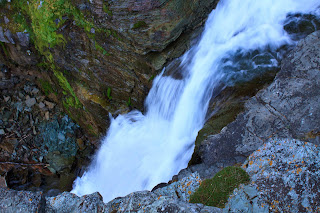 After Red Rock Canyon, we hiked through the woods to Blakiston Falls. 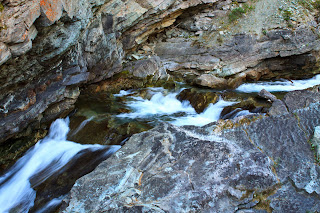 We hiked up the the canyon to the top of the falls... 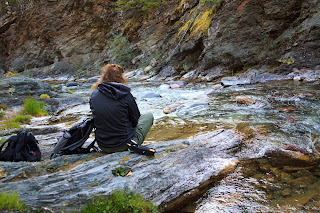 ...found a nice little place on the rocks along Blakiston Creek... 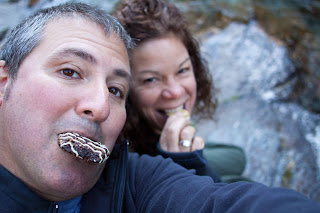 ...and enjoyed a Cliff bar breakfast with an incredible view. 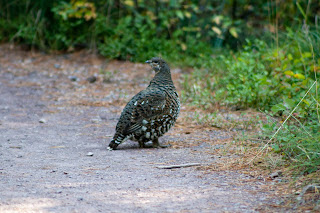 On our way back to the car, we ran into this little guy. We are not sure if this is a grouse or a ptarmigan but Chrissy says ptarmigan because of a funny story from our first trip to Alaska. We were hiking in Denali National Park with a group. We had been warned to talk loudly and make noise because we were hiking in bear country. I was walking along the trail in front of everyone when I heard some rustling in the brush along the trail. I jumped sideways away from the noise and out walked a ptarmigan. It's been twelve years and I still haven't lived down my ptarmigan attack. So today Chrissy was telling me, "Uh-oh it's a killer ptarmigan, talk loudly and slowly back away so I can pepper spray it." Then she laughs uncontrollably. 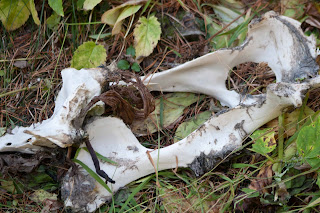 On our hike up to Crandell Lake, we came across this skull. Anytime you are hiking in the forest or up a mountain side and you find something like this, it can be a little unnerving. But I soldiered on. 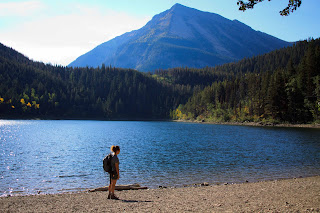 At Crandell Lake, the wind had really whipped up. As we learned, Waterton is a very windy place but so far it has been pretty calm. That was about to change. 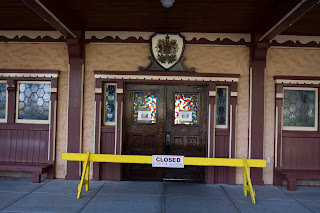 After lunch in town, we stopped on the bluff above Waterton Lake to check out the magnificant Prince Of Wales Hotel. Of course, it was closed for the season. We knew that we were traveling here at the end of the season so we weren't surprised. Hell, we purposely travel to these places during the off season to avoid the huge crowds. 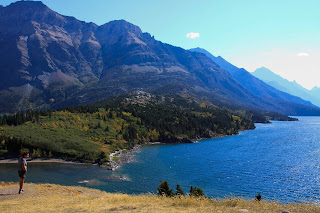 The wind was so strong here that standing still was difficult but the view of Waterton Lake was incredible...go ahead Chrissy walk closer to the edge. 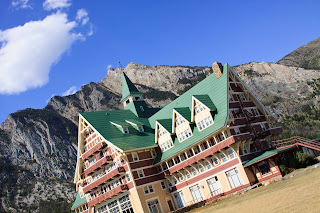 A slightly askew view of the Prince Of Wales Hotel. Waterton is advertised as where the prairie meets the mountains and the views prove that...to the east is flat...to the west 6000' mountains. 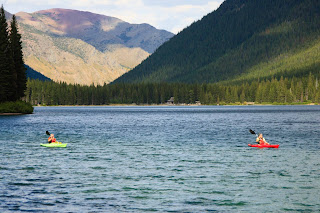 Then we drove the Akimina Parkway to Cameron Lake, where we hiked along the Lakeshore Trail. These people decided to enjoy the beautiful day from their kayaks. 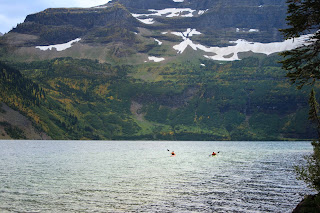 They continued on toward America (the south end of the lake is on the US border) but we stopped at the end of the trail because this area is off limits due to grizzly bear activity... 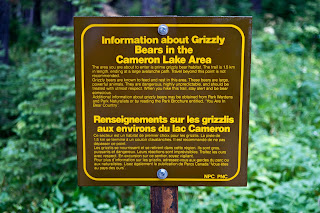 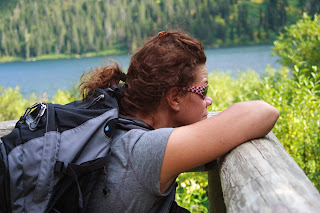 ...Chrissy contemplating ignoring the warnings and continuing on to look for bears. 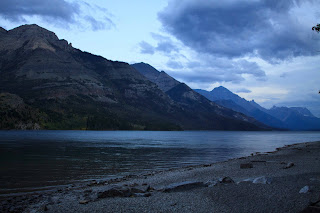 After dinner Chrissy did school work online and I walked along Waterton Lake's shoreline. I settled down on a huge rock as the sun set and the clouds rolled in...I probably would have fallen asleep there but it was damn windy.