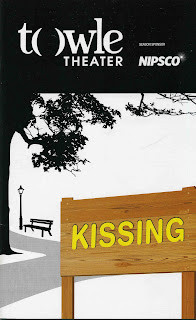 I always try to support local businesses and artisans. I really do try to find special one of a kind gifts when I am shopping. This past Christmas I bought seven season passes for the Towle Theater in Hammond, Indiana. The idea was to hand them out as gifts then we would all get together for a night out several times this year. Tonight was one of those nights. We had dinner at El Taco Real, stopped at the Paul Henry Art Gallery and saw the play "Kissing" at the Towle Theater. A thoroughly enjoyable night out for me. The play centered around the relationship of the four characters and as you might have guessed from the title, kissing was the central theme. The cast had an actor, Shawn A. Smith, that I really enjoyed from the first play of the season, "The 25th Annual Putnam County Spelling Bee". He was very good in this play also. He has been in a few Hollywood movies like "Zack & Miri Make A Porno" and "She's Out Of My League". Another cast member, Andrea Walczak, had never acted on stage before this play. She heard about the auditions and decided to rekindle a life long dream. When I read her story in the playbill, it brought a smile to my face. This is exactly why I wanted to support a local theater. Jeff Casey, Managing Director and Kevin Bellamy, Director of Administration do a fantastic job of putting on the plays and making everyone feel a part of something special. Let's face it, downtown Hammond is 50 years past it's prime and has not aged well. During the intermission, Jeff thanked everyone for their support. They have a record number of season tickets this year. All this gives me hope that Hammond might be able to make a comeback. It always seems like the artists start to turn a neighborhood around. They flock to a depressed area for the cheap rents. The clubs, galleries and restaurants follow which brings people to an area they wouldn't normally visit. The area becomes a hot spot. Rents increase, people with money move in, artists move on to find cheaper rent. The cool artist neighborhood turns into a very uncool yuppie neighborhood. OK, not exactly a happy ending. But my point is that maybe Hammond could become the cool artist neighborhood for a few years. That would be a big step forward for Hammond.
Posted by Gregg at 9:58 AM